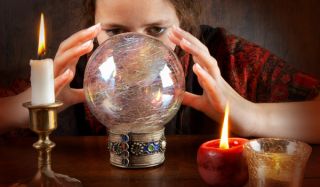 An emeritus professor at Cornell University, Daryl Bem spent much of the past decade conducting experiments that he believes demonstrate that psychic powers exist. The experiments tested the ability of college students to accurately sense random events, such as detecting where an image will flash on a computer screen.

Bem's research is to be published in "The Journal of Personality and Social Psychology," a respected psychology journal, and it's causing outrage among many researchers. Not because Bem demolishes any beloved scientific paradigms, but because his research is flawed.

James Alcock, a fellow of the Buffalo-based Committee for Skeptical Inquiry and longtime critic of parapyschology, told Life's Little Mysteries, "This is hardly the first time that there has been media excitement about new 'scientific' evidence of the paranormal."

Indeed, scientists with varying degrees of academic credibility have claimed for years to have found solid evidence of psychic abilities. For example, Gary Schwartz, a professor of psychology at the University of Arizona, discovered (what he insists is) proof of life after death in a series of experiments he conducted in the late 1990s with psychics. The subtitle of his 2002 book "The Afterlife Experiments" is "Breakthrough scientific evidence of life after death," though as 2011 begins, evidence of psychics and ghosts remains as ambiguous as ever.

Many of the methodological design flaws in Bem's experiments are of a statistical nature. For example, Alcock found "numerous t-tests without any control for multiple testing," which led to overestimating Bem's claimed significance levels. A fuller analysis of Alcock's criticisms will be published in the March/April issue of Skeptical Inquirer magazine, and much of it is now available online here.

Alcock sums up: "Overall, this is a very unsatisfactory set of experiments and it does not provide us with reason to believe that Bem has demonstrated the operation of [psychic ability]. All that he has produced are claims of some significant departures from chance, and these claims are flimsy given the many methodological and analytical problems."

It is possible that Daryl Bem's work will go down in history as the first to offer solid evidence of psychic abilities. When the dust settles and no one can replicate his findings, however, he might find himself in the same boat as countless other victims of flawed experiments and over-interpretation of normal statistical anomalies.

Benjamin Radford is managing editor of Skeptical Inquirer science magazine and author of Scientific Paranormal Investigation: How to Solve Unexplained Mysteries. His website is www.RadfordBooks.com.