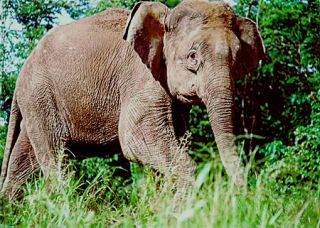 "Marauding pack of booze-addled elephants wreak havoc on Indian village." It's a story, or at least a headline, that's surprisingly common.

A few representative samples from the news reports on the latest incident: "Herd of Elephants Go on Drunken Rampage After Mammoth Booze Up," and, of course, "Trunk and Disorderly!"

Those headlines refer to an elephant bender that reportedly took place in India's Dumurkota village on Sunday (Nov. 4), and if it's never occurred to you before, the idea they convey is arresting — gigantic, angry drunks with tusks. But destructive, town-smashing alcoholism has apparently afflicted Indian pachyderms since at least the 90s. In 2010, there was "Elephants on Drunken Rampage Kill 3 People;" in 2004, "6 Drunk Elephants Electrocute Themselves;" and in 1999, the understated, but seminal, BBC headline: "Drunken Elephants Trample Village."

The Times of India tells the latest tale this way: "… a herd of 50-odd inebriated jumbos ransacked three houses and damaged paddy crops on Sunday. The strong smell of mahua drink drew the elephants out of the forest, and they raided the shop selling the drink. The herd wasn't happy, even after guzzling down 18 containers of mahua, and ransacked the adjoining huts in search of more."

It is certainly true that Indian elephants frequently clash with humans, damaging homes and sometimes killing people as they struggle to adjust to shrinking habitats. Marshall Jones, senior conservation adviser at the Smithsonian Conservation Biology Institute, estimated that as many as 300 people die in conflicts with elephants every year in India, while up to 200 elephants lose their lives to humans annually. [Killer Elephants in India: Why They Attack]

What isn't clear, though, is whether some wild elephants have really developed a jonesing taste for alcohol, as so many news reports allege. Also uncertain is whether elephants, if they did get into a store of liquor, would drink enough to bump an ordinary rampage up to a classifiable drunken rampage.

Science hasn't shied away from drunken elephants. In 1984, psychiatrist Ronald Siegel found that both chained circus elephants and elephants living in wildlife preserves would readily drink an unflavored, 7-percent-alcohol-by-volume (ABV) solution, even when other food and water sources were available. When he flavored solutions with mint, a favorite taste for elephants, they lapped up a 10-percent concentration, but refused to drink anything stronger.

In a 2005 study that put to rest the myth that African elephants get drunk on fermented fruit in the wild, the late Steve Morris, a biologist at the University of Bristol, did the math on elephant intoxication. He calculated that a 3.3-ton (3,000-kilogram) elephant, which would be skinny for a male Indian elephant and mid-range for a female, would have to speed-drink at least 2.6 gallons (10 liters) of a 7-percent ABV drink to get a behavior-modifying buzz.

The alluring brew that reportedly fueled the latest rampage is mahua, a drink made from the sweet flowers of the tropical mahua tree (Madhuca longifolia) that ranges in alcohol content from 20 to 40 percent, according to a 1998 study in the journal Alcohol Health and Research World.

That's above the limit the captive elephants would tolerate in 1984, and Shermin de Silva, a cofounder of Sri Lanka's Elephant Forest and Environmental Trust who studies conflict between elephants and humans, says she has a difficult time imagining that a wild elephant would willingly consume enough hard liquor to get drunk, unless the booze had an exceptionally sweet and appealing taste. Though the flowers of the mahua tree are sweet in their raw form, the drink is often described as pungent.

"[Elephants] are very picky, even about the quality of the water they drink," de Silva wrote in an email to Life's Little Mysteries. "A more likely interpretation [than a rampage provoked and fueled by booze] is that they broke into some houses and happened to consume some alcohol, after which they broke into some more houses."

Other drunken elephant reports have the animals lusting after Indian rice wine, which would likely have lower alcohol content than mahua, possibly below 10 percent in weaker brews. De Silva said elephants do have a predilection for invading rice paddies, an attraction she speculates may carry over to fermented rice products.

But most attacks on humans and raids on farmland are committed by sober elephants. In those cases, destructive behavior can't be glibly explained by drunkenness. Instead, it seems to be rooted in the confusions and resource shortages that elephants face as humans take an increasing share of their habitat.