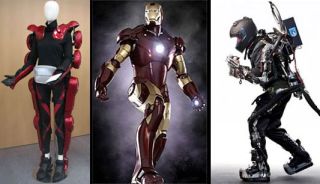 "Iron Man," the upcoming movie from Marvel Studios, will be on screens around the world in a few weeks. In the movie, a genius businessman invents a suit of armor with extraordinary strength. People everywhere have been looking at the previews, asking "Who will be first with a real powered-armored suit like Iron Man's?"

Well, exoskeleton fans, we've got some real contenders warming up.

The Sarcos XOS exoskeleton is an impressive device. The suit allows the user to endlessly pull weight; two hundred-pound pulldowns are easy. The user of the suit feels only about ten of those two hundred pounds.

Picking up and moving 70 pound cannisters is just as easy. How does it work? The machine follows the movements of the user, sampling the user's behavior thousands of times per second. A built-in computer performs the monitoring, and amplifies the user's strength with the robotic exoskeleton (see video).

However, Japan's HAL exoskeleton is not only an impressive device, but will soon go into production for sale. Cyberdyne Inc will produce 500 HAL suits each year, starting in October of 2008.

The fifteen kilogram battery-powered suit detects muscle movements through electrical signal flows on the skin surface. These currents are picked up by the sensors and sent to the computer, which translates the nerve signals into signals of its own for controlling electric motors at the hips and knees of the exoskeleton, effectively amplifying muscle strength. HAL stands for "hybrid assistive limb"; HAL-5 is the latest version of the suit (see video).

The two real-life exoskeletons and the movie version are compared in a graphic.