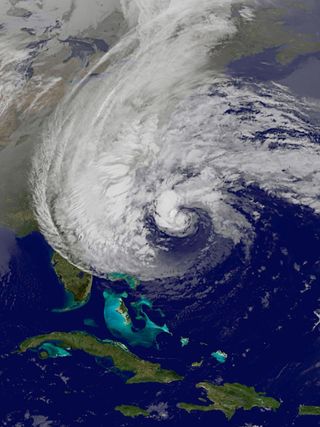 Dubbed Frankenstorm, Hurricane Sandy is an unusual storm by any measure.

It's enormous, could become a hybrid tempest of sorts, and is creeping north all in time for Halloween. Now, forecasters and emergency mangers have urged those in harm's way to prepare for the Category 1 hurricane, and for widespread impacts that potentially last for several days from Sandy's strong winds, heavy rains and punishing storm surge.

Here, OurAmazingPlanet reviews four facts about Sandy you need to know ahead of its arrival. [How to Prepare for Hurricane Sandy]

Sandy is now the second largest Atlantic tropical cyclone since 1988, behind 2001's Olga, which had winds that extended out 600 miles (965 km), according to Weather Underground.

"The size of the storm is going to carve a pretty large swath of bad weather," Rick Knabb, the director of the National Hurricane Center, said in a press conference on Sunday.

Some 50 million to 60 million people will potentially be impacted by this storm, authorities have said.

Sandy's wind field is so large that it could cover the eastern third of the country and even impact the Great Lakes as it works its way inland.

Sandy's size is also "why it is so capable of producing a life-threatening storm surge," Knabb said during the press conference. A storm's winds push up ocean waters ahead of it, and those waters can flood coastal areas as they're forced ashore.

New York City could see its highest storm surge levels in history. Hurricane Irene, for instance, caused a storm surgeof 4 feet (1.2 meters). Sandy is expected to cause life-threatening flooding in New York Harbor and tides of 6 feet to 11 feet (1.8 to 3.3 m) in areas of Long Island Sound, according to the National Weather Service.

3. What it's called doesn't matter.

Hurricane, post-tropical storm … even "Frankenstorm" — the name attached to Sandy isn't what people should focus on, Knabb said. More important is recognizing that it is a strong, large storm capable of causing significant damage.

While Sandy is still a hurricane, it is expected to transition into a post-tropical cyclone either before it moves ashore or shortly thereafter. While as a hurricane Sandy has derived energy from warm ocean waters and warm, moist air, it will begin to be fueled by the temperature difference between it and the cold air on the other side of a cold front sweeping across the country. [50 Amazing Hurricane Facts]

The National Hurricane Center didn't issue tropical storm or hurricane watches or warnings north of the North Carolina border in an effort to avoid confusion when the eventual switch to non-tropical alerts comes, Knabb said. Warnings being issued for areas under the gun are for "high winds" and flooding.

While Hurricane Sandy has been compared to the Perfect Storm that hit the Northeast in 1991, as well as other historic storms, "each storm is unique," Louis Uccellini, director of NOAA's National Centers for Environmental Prediction, said during the same press conference. Historical comparisons can really only be made after the storm, Uccellini added.

Knabb warned those in states that could see impacts from Sandy not to judge their level of danger based on previous storms.

"I'd like to urge people to pay attention to this particular storm. Every storm is different," he said.

For example, while New York City didn't bear the brunt of Hurricane Irene last year, it could see major impacts from Sandy.

1. Its effects will be localized.

While broad watches and warnings for high winds, heavy rains and storm surge have been issued, "not everyone is going to have the same impacts," saidCraig Fugate, director of the Federal Emergency Management Agency (FEMA).

The effects of Sandy may be highly localized. For example, while the potential storm surge for New York Harbor and the Long Island Sound is for 6 to 11 feet (2 to 3.5 meters), not all places along those coastlines will see that exact level of surge and the level they do see will depend on the timing of the storm's arrival and the tidal cycle, which is being affected by a full moon.

The National Hurricane Center forecast for Sandy notes that storm surge levels "can vary greatly over short distances." It also notes that while rainfall of 4 to 8 inches (10 to 20 centimeters) is expected over parts of the Mid-Atlantic, some areas could see isolated rains of as much as 12 inches (30 cm).

The best way to find out what to expect at your particular location is to go to weather.gov and type in your zip code, Knabb said.