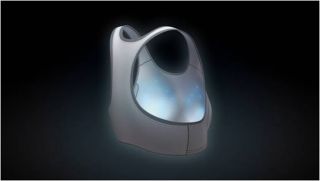 A sensor-studded sports bra worn by women for just half a day could make breast cancer screening both easier and more effective, according to enthusiastic news reports. But the prototype device's reliance upon measuring the temperature of breast tissue resembles a screening method that has proven ineffective in the past.

First Warning Systems Inc., the Reno, Nev., manufacturer of the "smart bra," says it uses 16 temperature sensors to detect "deep-tissue temperature changes" from the growth of new blood vessels related to cancer cells over 12 hours. That technology promises to provide noninvasive screening that's earlier and more accurate than the mammogram X-rays that represent the current standard for breast cancer detection.

Mammogram X-rays have their own problems and represent an imperfect solution for breast cancer screening, experts agree. But First Warning System's use of temperature measurements looks similar in many ways to "thermography" devices that have failed to beat mammograms in the past.

"Although this is an intriguing concept and an interesting field of research, clinical data that have been published so far do not indicate that any of the [temperature-measuring] devices currently available are accurate enough for clinical use," said Ted Gansler, a medical doctor who is the editor of CA: A Cancer Journal for Clinicians, published by the American Cancer Society.

Looking for a breakthrough

The company's technology works by tracking temperature changes to figure out the patterns related to the 24-hour circadian cycle of human cells. Some studies have suggested that cancer can disrupt circadian temperature patterns by spurring the growth of new blood vessels, which give off additional heat.

First Warning Systems said it has created specialized computer software that can "remember and recognize" the patterns of known cancer cases. That allows the software to provide human physicians with the probabilities for the presence of cancer based on previous patterns.

"The computer, ultimately, has an advantage because it has a perfect memory, and additional data can be integrated into the analysis such as age, family history, age at first birth, in ways that the radiologists cannot," FWS explained.

The First Warning Systems method would require a woman simply to wear the smart bra for 12 hours at home or at work rather than over the full 24-hour circadian cycle, because the software can model the last 12 hours. That process is more convenient and avoids the several seconds of discomfort at a physician's office when a woman's breasts are squeezed between two plates during the mammogram X-ray process. [INFOGRAPHIC: Post 9/11 Medical Advances]

The smart bra system also promises to overcome other limits of mammograms through its claimed ability to screen dense breast tissue — typically found in women under 40 years of age.

Putting it to the test

In three clinical trials involving 650 women, the First Warning Systems screening method beat mammograms head-to-head with 90 percent accuracy, and with false readings of less than 10 percent, according to the company.

A promotional video suggests the company's method also can detect signs of cancer just three or four years after the first gene mutations; mammograms can detect tumors no sooner than about 10 years after the first mutations. The method even offers the possibility of cheaply and effectively monitoring a breast cancer patient's health during radiation or chemotherapy treatments.

Such results sound promising if they can be verified. First Warning Systems has not released the full clinical trial results yet. The company said it plans to make all its clinical trial studies and results available to the public after completing a fourth and final clinical trial next year and clearing the trial results with the U.S. Food and Drug Administration.

Gansler, the editor of the cancer journal, emphasized the need to remain cautious until all those facts are public or published in peer-reviewed medical journals.

The stakes are high in the race to develop a more effective breast cancer detection device: Breast cancer will be diagnosed in about one in eight U.S. women. This year an estimated 226,870 women will be found to have breast cancer, and 39,510 women will die of it, according to the National Cancer Institute.

First Warning Systems announced in September it had begun raising $5 million. That funding would help cover the costs of making a "clinic-ready device," carry out preliminary tests of the device outside the clinical setting, complete the final clinical trial by 2013, meet European Union regulations and get FDA approval for selling the device in the U.S. market.

The company, which is targeting early 2014 for a U.S. market launch, could end up changing the standard for breast cancer screening if its clinical trial results hold up to official scrutiny — and it could herald a new wave of convenient, wearable medical devices integrated into clothing. But such promises are impossible to gauge until the clinical trial data becomes public.

"Most investigational (still being tested) medicines and medical devices, even those based on sound scientific and technical principles, do not end up being adopted into clinical practice," Gansler said. "The main reason is that once these new products are rigorously tested in clinical trials, the result of the study is that they are less effective than current practices."

For now, every major medical and public health organization recommends the traditional mammograms for women. Those organizations include the American Cancer Society, U.S. Preventive Services Task Force, American College of Radiology, and American Congress of Obstetricians and Gynecologists. None recommends thermography.

The FDA even went out of its way in a 2011 news release to warn U.S. women not to rely solely on thermography for breast cancer screening.

"At this time, based on evidence currently available, I think the vast majority of doctors will agree that a woman who chooses any breast cancer screening test based on temperature measurements, instead of mammography, would be making a serious mistake that could have fatal consequences," Gansler said.