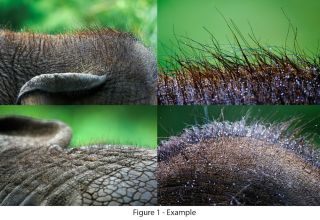 Hair on the back of an Asian elephant (right) and an African elephant's head (left).
(Image: © Conor Myhrvold.)

Elephant hair could help cool the giants down, unlike the hair on all other known animals that helps keep them warm, researchers say.

Hair is one of the key traits setting mammals apart from the rest of the animal kingdom, along with features such as milk production. Hair helps the body conserve heat, which is critical, given how much energy mammals burn to keep themselves warm-blooded.

Elephants, on the other hand, typically have to worry about shedding heat, not conserving it. Modern elephants often live in climates where temperatures can reach 122 degrees F (50 degrees C), and they have lived exclusively in warm regions since before the last ice age. In addition, elephants have a lot of meat generating heat and very little area to radiate this heat from — indeed, the ratio between the amount of volume their bodies occupy compared to the amount of surface area they have is the largest of any land mammal.

Scientists knew that elephants could deal with heat by flapping their ears like fans, bathing in water to cool down and in dust to repel sunlight, moving to shady areas, and spraying water and mud over their bodies. They also knew pachyderms had a number of internal tricks to handle heat, such as circulating warm blood to the ears where it can cool down. Still, none of these seemed enough to deal with the enormous amount of heat that elephants can generate. [Elephant Images: The Biggest Beasts on Land]

In this light, it seemed curious that elephants still possess sparse amounts of hair in places such as their ears. Researchers have suggested this hair was now vestigial, or perhaps serves a sensory role.

"Antonie van Leeuwenhoek, the inventor of the modern microscope, published the first close-up view of elephant hair at the turn of the 18th century," said researcher Elie Bou-Zeid, an environmental fluid dynamicist at Princeton University. "It is incredible that the earliest reference to elephant hair in science was described by the guy who invented the microscope, after which point it was largely overlooked by science, with many statements to the effect that elephants were essentially hairless."

Now, scientists find that elephant hair does not conserve heat, but actually may help dissipate it from their bodies.

"We show now that the hair likely does have a purpose," Bou-Zeid told LiveScience.

The researchers calculated how heat flowed from a surface given a range of wind speeds and hairs that were on average a half-millimeter wide and 20 millimeters long, as is often the case with elephants. They varied the density of these hairs on the skin, as well as how smooth and rough this skin was. They concluded elephant hairs could significantly enhance their ability to deal with heat.

"What was surprising and exciting to find was the magnitude of this positive effect," Bou-Zeid said. "We ended up discovering that the hair cover can enhance heat loss from the elephant anywhere between 5 to 20 percent, depending on wind speed." [10 Surprising Animal Facts]

The researchers suggest that heat from around the base of the hairs can flow out through the hairs from the elephant's body like electricity through a wire, provided not much else surrounds that hair.

"Heat exchange from a surface, skin or hair, depends to a very large extent on the air speed right next to that surface," Bou-Zeid explained. "Right at the skin surface, air speed is low, slowed down by the skin. Hairs can efficiently take heat from the skin through their base and conduct it away from the body towards the tip of the hair. The upper part of the hair gets a stronger air speed than the skin since air is not slowed down by the skin there — thus hair can now release that heat to the fast air more rapidly."

Past research had suggested leaf hairs and cactus spines can help cool plants down. Many computers use metallic needle-shaped "pin fins" to help cool electronics as well. However, this is the first time animal hairs were seen playing a similar role.

"Hair cover is often thought of as an insulator, which it is when the hair is dense," Bou-Zeid said. "But in this paper, we show that sparse hair cover has the opposite effect."

The researchers suggest that hair may have developed to cool animals down when it first appeared 100 million to 300 million years ago, when the Earth was much warmer than today. "Maybe its insulating effect only came later in its evolution," Bou-Zeid said.

"The next natural step is to look for other similar occurrences in modern-day or fossilized animals of hair acting to cool the body, as well as to do thermal experiments measuring the skin and hair temperatures of elephants," Bou-Zeid said.

Bou-Zeid and his colleagues Conor Myhrvold and Howard Stone detailed their findings online today (Oct. 10) in the journal PLoS ONE.