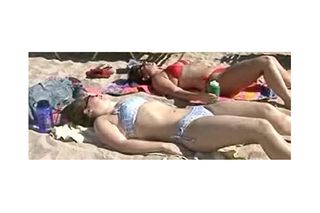 It's hot out there.

Last month, more than 3,200 temperature records were broken or tied around the United States, with mercury readings including a scorching 114 degrees Fahrenheit in Yuma, Ariz., 94 in Lincoln Neb., and 98 in Queens, NY.

In the last two weeks, a third of Americans have endured a heat advisory or excessive heat warning. And temperatures from the Great Plains to the Atlantic coast are running a good 10 to 15 degrees above average.

As the mercury has soared, so too have heat-related deaths. The current count is 23, according to news reports. And with forecasts projecting continued steaminess -- along with continued power outages -- in many places, chances are that more people will succumb.

So, why can heat be so deadly?

NEWS: What's Behind The Record Heat?

Hot weather alone is not dangerous, said Chris Minson, an environmental physiologist at the University of Oregon, Eugene. Instead, it's a combination of hot temperatures, high humidity, and often preexisting health conditions that can push a person's core body temperature to reach the danger zone of 104 F. At that point, the nervous system goes haywire, the heart experiences excessive stress, and organ systems begin to fail.

The human body can actually tolerate high temperatures quite well, Minson said. In experiments, people have withstood temperatures as high as 215 F for as long as 30 minutes. And with training, athletes often compete in long-distance running and biking races in desert conditions without dangerously overheating.

To cope with rising environmental temperatures, the heart begins to work harder to pump blood to the skin, where blood vessels dilate to allow more heat to dissipate. At the same time, we produce more sweat, which is the body's best strategy for cooling down.

In order for sweat to cool us off, though, it has to evaporate. As the salty liquid turns to a gas, the skin gets cooler. That, in turn, cools the blood near the surface of the skin, which then can return to the body's core and protect it from overheating.

But with high ambient temperatures and especially high levels of humidity, evaporating beads of perspiration are replaced by pouring rivulets of sweat. The result is a loss of liquid from the blood and the cells, but rivers of sweat do nothing to lower core temperatures.

"We have this ability to sweat that's a fantastic cooling system," Minson said. "Once there's high humidity, now the problem is that sweating is no longer effective."

The brain and central nervous system are particularly sensitive to high internal temperatures, which can cause confusion, strange behaviors, loss of memory and an inability to think clearly. That makes it extremely difficult for a heat-stressed person to realize that he's in trouble.

People with pre-existing health conditions face extra challenges. The heart has to work harder in the heat, increasing the risk for heart attacks in people with cardiovascular problems. For people with diabetes, kidney diseases and other conditions, regulating temperature and fluid levels can be particularly difficult, leading to dehydration, kidney failure, liver problems and worse.

Warm nights that never dip below 75 or 80 degrees, make it hard for the body to find time to recover, especially for people who don't have air conditioners or who have lost power.

From 1979 to 2003, more than 8,000 people died from exposure to excessive heat in the U.S., according to the Centers for Disease Control and Prevention. More people died from heat during that period than from hurricanes, lightning, tornadoes, floods, and earthquakes combined.

People who are in good shape deal better with the heat, because they sweat sooner and more and they have better blood flow to the skin. But even if you're healthy and fit, exercising in the heat can push you over the edge.

Experts recommend drinking plenty of fluids and exercising indoors on the hottest days. If you have to get out, drink one to two liters of water per hour. Hit the trails or pound the pavement at the coolest time of day, usually in the early morning. And watch for your area's heat index, which combines temperatures with humidity levels to give a more accurate idea of how your body will respond to the day's conditions.

Those recommendations will stand for at least another few weeks in much of the country. Because a mass of high pressure is pushing cool fronts far to the Canadian north, tropical moisture is being pulled from the Gulf of Mexico region into the Midwest and Ohio Valley, where steamy conditions are projected to persist for a while, said Katie Garrett, a meteorologist with the National Weather Service Operations Center in Atlanta.

The East, Northeast and Southern states should return to normal in the next week or two, she said. But the west is going to heat up, particularly in the Pacific Northwest and the Northern Rockies.

Even though the heat seems excessive to many people right now, Garrett added, it's not that unusual for large portions of the United States to get this hot at this time of year. What's unusual is how early the heat started and how long it has lasted.

"This is nothing shocking," she said. But it's definitely making the news."