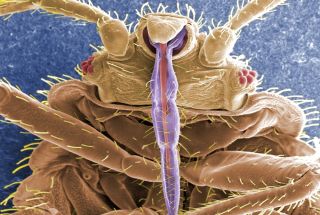 Human body hair might seem to be useless on today's modern man, but it could help us detect parasites, researchers suggest, adding there's a chance our female ancestors preferred a bug-free mate, and so opted for hairier guys.

Humans appear relatively hairless compared with our ape relatives, but the density of hair follicles on our skin is actually the same as would be expected of an ape our size. The fine hairs that cover our bodies, which have replaced the thicker ones seen on our close relatives, are thought to be an evolutionary leftover from our hairy ancestors.

Now scientists find these fine hairs are useful after all — people with more of them are better at detecting bedbugs.

"I run a research group that seeks to understand the biology of bloodsucking insects," said researcher Michael Siva-Jothy, an evolutionary ecologist at the University of Sheffield in England. "Our aim is to find ways of controlling these insects effectively and thereby preventing the transmission of insect-vectored disease."

The researchers found that body hair significantly enhanced how well people detected the bedbugs, with participants noticing the bugs on the hairy arm quicker than they did when tested on the "hairless" arm, with the hairs serving as motion detectors. The hair also prolonged how long it took the parasites to find places to feed, presumably because they hindered movement, Siva-Jothy told LiveScience.

Men seemed better at detecting parasites — they are generally hairier than women because of higher testosterone levels. This does not necessarily mean that women are more likely to be bitten — blood-sucking insects likely prefer to bite hosts in relatively hairless areas such as ankles.

Although the researchers stress they are not saying that the differences in male and female body hair are due to parasites, they do speculate that in our evolutionary past women might have preferred men with fewer parasites on them — hairier men.

The scientists detailed their findings online Dec. 13 in the journal Biology Letters.