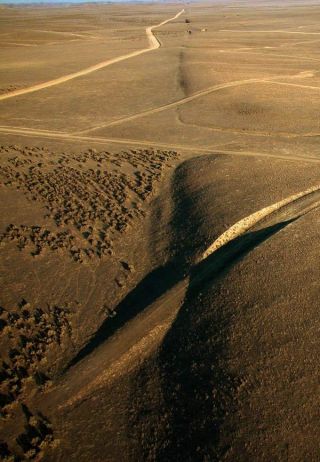 A massive spinning wheel in one researcher's lab could help explain how major earthquakes get their start and help shed light on the risks that earthquakes pose.

"Anything that improves our understanding of earthquakes leads to a better understanding of their impact and their frequency," said researcher Ze'ev Reches, a structural geologist at the University of Oklahoma and the one whose lab houses the giant spinning wheel.

Large earthquakes grow as ruptures that expand along a fault. These go on to activate countless patches of that fault and potentially others.

To simulate this rupturing process, lab simulations of earthquakes often take two rock blocks and press them against each other until the stress eventually causes the rock to break. The pieces then alternate sticking and sliding over each other along the rupture, just as scientists think faults often behave during earthquakes.

However, these movements are often thousands to millions of times punier than the ones seen in large, damaging temblors. So it remains unclear how well these lab simulations reflect the true physics of large earthquakes.

Instead of relying on a motor that applies a gradual and continuous force on the rock, as in these previous experiments, Reches and his colleagues wanted to see what might happen if they suddenly dumped a burst of energy onto rock. To do so, they employed a massive flywheel — essentially, a giant spinning wheel used to store and release kinetic energy.

"Patches of faults have finite amounts of energy stored in the rocks, so we thought using a flywheel to provide a finite amount of energy would allow a good simulation of earthquakes," Reches said.

The researchers used a flywheel to rapidly transfer energy to a disk-shaped sample of granite and dolomite. By changing the rate at which the 500-pound (225 kilograms) flywheel spun, they could trigger changes in the rock comparable to those seen in earthquakes of magnitudes 4 to 8. [Video: What Does Earthquake 'Magnitude' Mean?]

The scientists found the way the granite responded to the flywheel was very similar to how past research envisioned natural earthquakes behaved. For instance, very rapid initial acceleration of ruptures in the rock were followed by gradual deceleration.

"Our findings suggest the weakening of rock associated with earthquakes is largely controlled by the acceleration that surfaces of the fault undergo," Reches said. "Small patches on a fault surface undergo tremendous acceleration in an earthquake in a fraction of a second or over several seconds, and this propagates over the entire fault."

The scientists detailed their findings in the Oct. 5 issue of the journal Science.