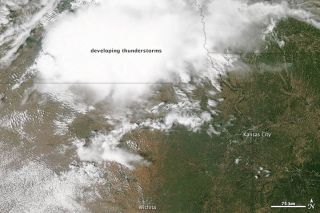 On May 29, it seemed like Brian Johnson wasn't in Kansas anymore — the normally verdant ground dry as a sun-bleached femur. Most un-Kansas like — usually, the state receives 3.8 inches (96.5 millimeters) of rain in May. This year, it had got only 0.6 inches (16 mm) by the 29th.

But on May 30, winds of change sprung up. Three ingredients combined to set the stage for a large thunderstorm: high humidity, atmospheric instability (a large temperature difference between warm, moist air near the ground and colder air higher up) and a swirling pattern of rising and cooling air called convection.

By the afternoon, a large storm system developed northwest of Wichita, with a squall line, or storm front, which forecasters warned could turn into a fierce windstorm called a derecho. The storm raced toward the town at 43 mph (70 kph), dumping torrential rains and hail the size of Ping-Pong balls.

As the system approached a small city near Wichita named Kechi, Johnson,  a  storm-chasing photographer, was there to capture it. The image, which is a panorama stitched together from multiple photos, shows a low-elevation, wedge-shaped cloud known as a shelf cloud forming over a freshly cut wheat  field. Shelf clouds often have damaging winds underneath them and form just ahead of squall lines.

Hours earlier, 438 miles (705 kilometers) overhead, NASA's Aqua satellite acquired a bird's-eye image of the approaching system. The large white cloud in the upper part of the image is one of the numerous storm clouds that billowed up over the area that afternoon as warm, moist air from the surface rose rapidly.

"There is an open farm field roughly 2 miles from my house," Johnson wrote on a blog that chronicles his storm-chasing. "I sat there for about 20 minutes before this large squall line pushed through the clouds. I was hit with a pretty good gust front as it got closer, but as the winds increased, I decided to get to shelter. This photo was one of the last ones I took."

And good thing he did. Johnson entered it into an extreme weather photo contest sponsored by NASA— and he won. His photo is now featured on the website of NASA's Precipitation Measurement Mission, a program with the goal of improving the forecasting of extreme weather.

You can see Johnson's photo and the other top five photos of extreme weather here.