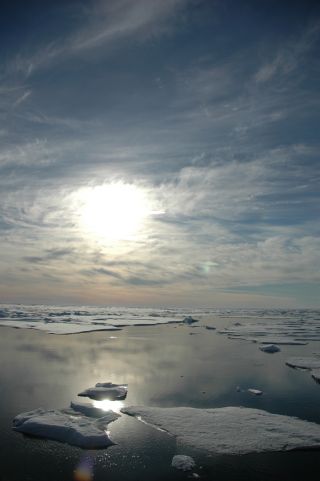 Distracting from the news that Arctic sea-ice extent reached a record low on Sept.16 is a widely circulating blog article claiming that at the opposite end of the Earth, Antarctic sea ice is more than making up for the losses.

In the post, climate change skeptic and blogger Steven Goddard states that Antarctic sea ice reached its highest level ever recorded for the 256th day of the calendar year on Sept. 12. He reasons that the Southern Hemisphere must be balancing the warming of the Northern Hemisphere by becoming colder (and thus, net global warming is zero).

The National Snow & Ice Data Center (NSIDC), which tracks sea ice using satellite data, explains on its website why Antarctic ice has weathered global warming more robustly than Arctic ice. Goddard dismisses the explanation, concluding instead, "Antarctic and Arctic ice move opposite each other. NSIDC's dissonance about this is astonishing."

Despite its lack of scientific support, Goddard's post has garnered attention around the Web. In a Forbes.com column about the record high Antarctic sea ice, skeptic James Taylor writes, "Please, nobody tell the mainstream media or they might have to retract some stories and admit they are misrepresenting scientific data."

But if anyone had asked an actual scientist, they would have learned that a good year for sea ice in the Antarctic in no way nullifies the precipitous drop in Arctic sea-ice levels year after year — or the mounds of other evidence indicating global warming is really happening.

"Antarctic sea ice hasn't seen these big reductions we've seen in the Arctic. This is not a surprise to us," said climate scientist Mark Serreze, director of the NSIDC. "Some of the skeptics say 'Well, everything is OK because the big changes in the Arctic are essentially balanced by what's happening in the Antarctic.' This is simply not true." [Former Global Warming Skeptic Makes a 'Total Turnaround']

Projections made from climate models all predict that global warming should impact Arctic sea ice first and most intensely, Serreze said. "We have known for many years that as the Earth started to warm up, the effects would be seen first in the Arctic and not the Antarctic. The physical geography of the two hemispheres is very different. Largely as a result of that, they behave very differently."

The Arctic, an ocean surrounded by land, responds much more directly to changes in air and sea-surface temperatures than Antarctica, Serreze explained. The climate of Antarctica, land surrounded by ocean, is governed much more by wind and ocean currents. Some studies indicate climate change has strengthened westerly winds in the Southern Hemisphere, and because wind has a cooling effect, scientists say this partly accounts for the marginal increase in sea ice levels that have been observed in the Antarctic in recent decades.

"Another reason why the sea-ice extent in the Antarctic is remaining fairly high is, interestingly, the ozone hole," Serreze told Life's Little Mysteries. This hole was carved out over time by chlorofluorocarbons, toxic chemicals formerly that were used in air conditioners and solvents before being banned. "The ozone hole affects the circulation of the atmosphere down there. Because of the ozone hole, the stratosphere above Antarctica is quite cold. Ozone in the stratosphere absorbs UV light, and less absorption [by] ozone makes the stratosphere really cold. This cold air propagates down to the surface by influencing the atmospheric circulation in the Antarctic, and that keeps the sea ice extensive."

But these effects are very small, and Antarctic sea-ice levels have increased only marginally. In the coming decades, climate models suggest rising global temperatures will overwhelm the other influences and cause Antarctic sea ice to scale back, too.

The extent of Arctic sea ice at its summertime low point has dropped 40 percent in the past three decades. The idea that a tiny Antarctic ice expansion makes up for this — that heat is merely shifting from the the Southern Hemisphere to the Northern and therefore global warming must not be happening — is "just nonsense," Serreze said.