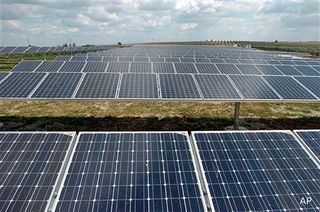 A field of solar cells.
(Image: © The Associated Press)

Solar energy has long been touted as better for the environment than fossil fuels. Increasingly, however, there are fears that making solar cells might release more hazardous pollution than fossil fuels would. To ease those concerns, scientists studied the matter closely and now conclude that manufacturing solar cells produces far fewer air pollutants than conventional fossil-fuel-burning power plants. The researchers gathered air pollution emissions data from 13 manufacturers of four major commercial types of solar cells in Europe and the United States from 2004 to 2006. Making solar or photovoltaic cells requires potentially toxic heavy metals such as lead, mercury and cadmium. It even produces greenhouse gases, such as carbon dioxide, that contribute to global warming. Still, the researchers found that if people switched from conventional fossil fuel-burning power plants to solar cells, air pollution would be cut by roughly 90 percent. Although manufacturing solar cells requires heavy metals, the researchers noted that coal and oil also contain heavy metals, which get released during combustion. "One of the most promising photovoltaic technologies is based on cadmium telluride, but cadmium is one of the worst heavy metals. Still, if we compare direct emissions from production of cadmium telluride cells with coal power plants, toxic emissions would up 300 times lower," said researcher Vasilis Fthenakis, an environmental engineer at Brookhaven National Laboratory in Upton, N.Y. In fact, most of the toxic emissions from making solar cells come indirectly from fossil fuel-burning power plants, which provide the electricity needed for manufacture. Ironically, solar cell factories will likely need to rely on fossil fuels for power for a while, since solar power is too intermittent to use, Fthenakis explained, shutting down as it does when the sun goes down. Still, Fthenakis added, scientists are researching ways to economically store power from solar cells on a large scale. Doing so could help lead to solar cell factories that run off solar power, "a self-sustained process," he told LiveScience. Fthenakis and his colleagues detailed their findings in the March 15 issue of the journal Environmental Science & Technology.