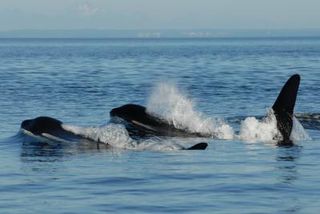 This shows southern resident killer whales in the waters around the San Juan Islands, USA and British Columbia. Both male and female killer whales will remain with their mothers throughout their lives. Adult male killer whales are easily distinguishable from females by their considerably larger dorsal fins.
(Image: © David Ellifrit Centre for Whale Research)

Menopause is a rare phenomenon in the animal world. Besides humans, killer whales are among the few species whose females lose their ability to reproduce well before the end of their natural life span. But to what advantage?

Researchers have speculated that for humans, menopause evolved to reduce competition between different generations of reproducing women in one family, or, as the grandmother hypothesis states, older women might forgo costly late-life pregnancy to focus on the survival of their existing children and grandchildren. And now scientists say that for killer whales, menopause might allow aging mothers to care for their adult sons.

"Our analysis shows that male killer whales are pretty much mommy's boys and struggle to survive without their mother's help," Dan Franks, of the University of York, said in a statement. "The need for mothers to care for their sons into adulthood explains why killer whales have evolved the longest post-reproductive lifespan of any non-human animal."

Female killer whales typically stop reproducing by their 40s, but can survive into their 90s. Franks and his fellow researchers reported in the journal Science Thursday (Sept. 13) that having a menopausal mom around boosted an adult male whale's chances of survival, but the scientists didn't find the same effect in females.

For a male whale over 30, a mother's death meant he was 14 times more likely to die within the year. For his female counterparts, a mother's death only boosted the risk of death by just under three-fold. And daughters under 30 saw no change to their survival rate when they lost their moms, the researchers said.

The scientists speculated that a doting killer whale mom might focus on her son's survival to ensure he'll give her lots of grand-whales (and, in turn, spread her genes). But why not do the same for her daughters? In killer whale societies, sons and daughters stay with their moms in a single group throughout their lives. When sons mate, however, their kids are cared for by females in another group, while the daughters' kids join the mom's group, sapping the family's resources.

"Killer whales are extraordinary animals and their social groups are really unusual in that mothers and their sons are lifelong companions," said study researcher Emma Foster of the University of Exeter. "Our research suggests that they have developed the longest menopause of any non-human species so that they can offer this level of commitment to their older offspring."