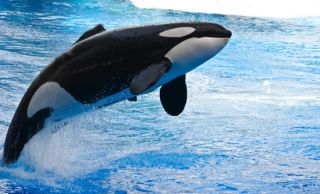 Killer whale mothers give birth to one calf about every 5 years. Their gestation period ranges from 15 to 18 months.
(Image: © stock.xchng)

Killer whales that are nearing menopause make the best moms, a new study finds. This could be the case among humans, though it's less clear. Killer whales (Orcinus orca) are extremely long-lived marine mammals. While males can live as many as 50 years, female killer whales can live much longer — scientists have even found one female that is thought to be more than 90. Females can have their first calves (as baby killer whales are called) as early as age 10, and can continue having offspring until their early 40s, when menopause can start to kick in. Just as in humans, menopause ends a female killer whale's ability to reproduce. Just why humans, whales and other mammals have evolved this trait is unknown. Some scientists think menopause could simply be due to physiological deterioration that comes with age, while others think it could increase the fitness of older females. Eric Ward of the Northwest Fisheries Science Center in Seattle and a team of researchers studied killer whales living off the coasts of Washington and British Columbia, Canada, to see what benefits menopause might have on females, including on their calf-rearing abilities. Older is better The researchers used 30 years of data collected by the Center for Whale Research and Canada's Department of Fisheries and Oceans that includes information on all of the whales living in the area. "During annual photographic surveys, nearly every individual in the population has been recorded. Each animal has unique pigmentation, scars, and fin shapes, allowing us to track the survival and reproductive performance of each female over time," Ward said. The researchers didn't find any direct benefit of menopause for mothers (or grandmothers), but they did find an impact on the survival of calves: Calves born to older mothers had a 10 percent higher survival rate than other calves. "We found that the oldest mothers may also be the best mothers," Ward said. "Older females may be more successful in raising young because of maternal experience, or they may allocate more effort to their offspring relative to younger females," which are splitting their attention between their calves and mating. The results of the research, which was partially funded by the National Research Council, were detailed in the Feb. 3 issue of the online journal Frontiers in Zoology. The researchers also found that 3-year-old killer whales may benefit from helpful grandma whales; studies of humans have also shown a positive grandmother effect on newly-weaned infants, the researchers said in their study. Biology and sociology Human females of course also become infertile once they reach menopause, but their ability to bring a pregnancy to term and have a healthy baby can be affected long before that, as problems in the reproductive system can begin to accumulate after about age 40. "Biologically you've got a pretty sharp ceiling," said retired sociologist John Mirowski, formerly of the University of Texas, Austin. Mirowski was not involved in the new whale study. But a mom's age isn't the only factor that affects the health and development of her children. "There's a tradeoff between biology and sociology," Mirowski told LiveScience. And for child-rearing socially speaking, "the later the better," Mirowski said. Older women are more likely to have careers and college degrees, which means they've had "time to develop personally," which can contribute to the quality of a marriage and the economic stability of a household, all of which can have a positive impact on a child. When biological and sociological factors are taken into account, there's a "just right" age range of about 25 to 35 or 40 where there is minimum risk to the mother and baby and maximum benefit, Mirowski said. Though that doesn't mean that older women can't have healthy children, or that "we can't push that ceiling back," he added.