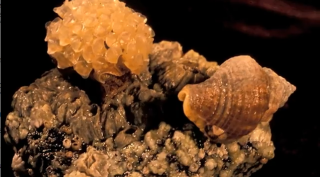 Just a quarter of the offspring this male marine whelk (left) carries on his back are his kids.
(Image: © UC Davis)

One male snail has just joined the ranks of the animal world's best dads. Researchers report that fathers in a species of marine whelk take on all of the parenting responsibilities, from carrying the eggs to hatching them and even acting as stepdads, while the mothers are highly promiscuous.

The snail, Solenosteira macrospira, lives in mudflats off Baja California and has been studied by scientists only in the past few decades. Researchers at the University of California, Davis, report that when the mollusks mate, the female glues dozens of capsules, each filled with up to 250 eggs, to the male's shell.

The dad carries the eggs around on his back, protecting them from heat and drying until they hatch in a month-long and rather violent process. A mass fratricide occurs at hatching, and only a handful of babies are spared as a group of the tiny snails eat the rest of their siblings, the UC Davis researchers found. [The Animal Kingdom's Most Devoted Dads]

And after all that, most of the surviving babies probably are not the biological kids of the snail dad. A DNA analysis of the capsules showed that the male snails had fathered, on average, just 24 percent of the offspring the females dropped off on their backs. Some even carry the offspring of up to 25 other dads, the researchers said.

"The promiscuity in the female snails is extraordinary," researcher Stephanie Kamel said in a statement.

As male-only parenting comes with a great energy loss for the snail dads — they lose a significant amount of their body weight during the process — the researchers have been trying to figure out why the males take on the burden. It could be that they have no other option if they want a chance at successfully producing offspring, and carrying lots of egg capsules could signal to potential female mates that they are good parents.

"If he wants to get any action, he has to pay the price," lead researcher Rick Grosberg said in a statement from UC Davis.

The findings appeared online July 26 in the journal Ecology Letters.