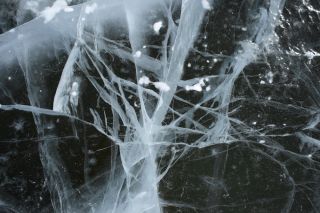 The Big Bang may have been the moment that a water-like universe froze to form the ice-like universe we see today, a new theory holds.
(Image: © Image via Shutterstock)

How did the universe begin? The Big Bang is traditionally envisioned as the moment when an infinitely dense bundle of energy suddenly burst outward, expanding in three spatial directions and gradually cooling down as it did so. Now, a team of physicists says the Big Bang should be modeled as a phase change: the moment when an amorphous, formless universe analogous to liquid water cooled and suddenly crystallized to form four-dimensional space-time, analogous to ice.

In the new study, lead author James Quach and colleagues at the University of Melbourne in Australia say the hypothesis can be tested by looking for defects that would have formed in the structure of space-time when the universe crystallized.

"Think of the early universe as being like a liquid," Quach said in a statement. "Then as the universe cools, it 'crystallises' into the three spatial and one time dimension that we see today. Theorized this way, as the universe cools, we would expect that cracks should form, similar to the way cracks are formed when water freezes into ice."

If they exist, these cracks should be detectable, the researchers said, because light and other particles would bend or reflect off of them as they trek across the cosmos. [The History & Structure of the Universe (Infographic)]

The notion that space and time are emergent properties that suddenly materialized out of an amorphous state was first put forth by physicists at Canada's Perimeter Institute in 2006. Called "quantum graphity," the theory holds that the four-dimensional geometry of space-time discovered by Albert Einstein is not fundamental; instead, space-time is a lattice constructed of discrete space-time building blocks, just like matter looks continuous, but is actually made of building blocks called atoms.

Originally, at extremely high temperatures, the building blocks were like liquid water: they contained no structure, "representing a state with no space," the researchers wrote in their paper. At the moment of the Big Bang, when the temperature in the universe dropped to the space-time building blocks' "freezing point," they crystallized to form the four-dimensional lattice we observe today.

The math describing the theory checks out, but "the challenge has been that these building blocks of space are very small, and so impossible to see directly," Quach explained. From the human vantage point, space-time looks smooth and continuous.

However, while the building blocks themselves might be too small to detect, the physicists hope to observe the boundaries that would have formed as regions of crystallizing building blocks butted against one another at the time of the Big Bang, creating "cracks" in the universe. More work is needed to predict the average distance between the cracks — it isn't known whether they are microscopic, or light-years apart — in order to characterize their effects on particles.

The research by Quach  and his team is detailed in this month's edition of the journal Physical Review D.