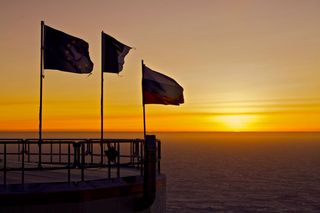 Very early on a recent Sunday morning, doctor and medical researcher Alexander Kumar opened a hatch, climbed out on a deserted rooftop, and drank in the first sunlight he'd seen in months. A honey-colored sky lit the vast plateau of the East Antarctic Ice Sheet with a tangerine glow.

It was Aug. 12, and Kumar was perched atop the Concordia Research Station, a joint French-Italian outpost in the middle of East Antarctica, watching the first sunrise to light his desolate corner of the continent in more than three months.

"It was incredible, but hurt my eyes," he said in an email to OurAmazingPlanet. Kumar, the lone Brit among a dozen European scientists and staff who have remained at Concordia throughout Antarctica's brutal winter, had even brought along some music for the occasion. "I had my iPod preloaded with 'Here Comes the Sun' by the Beatles," he said.

The sun set on May 4, marking the onset of austral winter — a season of permanent night and bitter cold, when temperatures at Concordia plunge to minus 100 degrees Fahrenheit (minus 73 degrees Celsius). Now that the sun has returned, the station will get a little more sunlight each day until the height of austral summer, when the sun doesn't set for weeks on end.

"Walking around the station you see people smiling now, for no reason other than the sunlight," Kumar said. [See Kumar's pictures of life at Concordia]

Concordia can house up to 90 people during the summer months, but during the winter, only a handful stay behind. It's so cold that aircraft can't take off or land — hydraulic fluid freezes — so the remaining residents are utterly cut off from the outside world.

Kumar is tasked with keeping them healthy, but is also conducting research on them for the European Space Agency. Concordia is so remote, it is used as an analog for human spaceflight.

"In the application, I remember reading we'd be more isolated than the astronauts on the International Space Station, because they can be back on Earth in two days," Kumar told OurAmazingPlanet in an interview in February.

The samples Kumar has gathered during the months of isolation, everything from saliva and blood to data on brain activity, will eventually be shipped to labs across Europe, in hopes that analyses will allow researchers to better understand what changes would occur in the human body during an extended trip through space.

Kumar said that during the months of darkness, "people became withdrawn in certain respects, drawing back into their rooms and own lives, like turtles into their shells."

Yet it was largely a positive experience. "I enjoyed winter, as did many of my colleagues," Kumar said, as a treasure trove of his photographs of life at Concordia can attest.

The sunlight that appeared on Aug. 12 was fleeting — the sun stayed above the horizon for only a couple hours — but it left a deep impression.

"One of the most shocking sights I have seen here was seeing sunlight outside a window again," Kumar said. "I will never forget that, not ever."

Keep up on the latest from Concordia at Kumar's blog, www.AlexanderKumar.com.