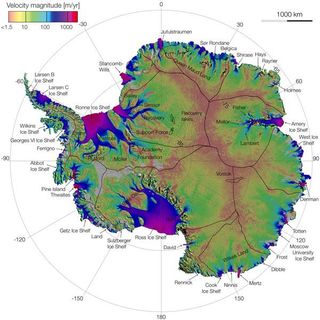 Thousands of earthquakes occurring in rapid succession in less than a year under an Antarctic glacier may have been linked to ocean tides, new research suggests.

Scientists investigated seismic activity under David Glacier, a large glacier in East Antarctica about 270 square miles (700 square kilometers) in size. The glacier serves as the outlet from which ice from 4 percent of that region's ice sheet drains out toward the sea.

To learn more about the foundations and behavior of this glacier, the researchers analyzed seismic data gathered from there over a nine-month period between 2002 and 2003 by the Transantarctic Mountains Seismic Experiment array of 42 seismometers. They identified about 20,000 seismic events during this period that were stronger and lasted longer than the shaking typically seen with glaciers.

"The fact these events exist is fairly surprising," researcher Lucas Zoet, a glaciologist at Pennsylvania State University, told OurAmazingPlanet. "This type of seismic behavior had not been observed before in Antarctic outlet glaciers, so one main challenge was just to categorize it initially."

"This is not something that would have been expected, so when we looked at the data, this pattern of events every 25 minutes really popped out," Zoet said.

The researchers suggest this shaking was caused by the debris-laden ice of the glacier moving over a rough patch of bedrock and that the regularity of these events was linked to glacier movement by ocean tides.

Specifically, the tides influence the speed at which the glacier flows, Zoet explained. "When the tide is high, the speed goes down a little bit, and that reduction in speed results in changes to the spacing of the seismicity," he said. "The high tide causes events to become spaced further in time, while the low tide causes them to become closer."

It remains uncertain what additional seismic changes might come with sea level rise or when the next big earthquake there might occur, "but when we find something unexpected such as this, it allows to get a better grasp on the basics, which may in time further our insights with those large-scale processes," Zoet said.

The scientists detailed their findings online Aug. 19 in the journal Nature Geoscience.