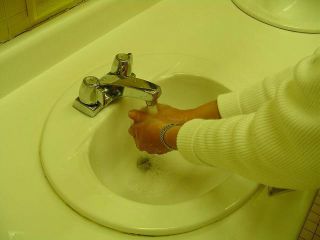 Researchers are raising the alarm over triclosan — an antibacterial chemical commonly found in soaps, deodorants, mouthwashes, toothpastes and even toys and trash bags — after a study found that the compound might impair muscle function.

The researchers at the University of California, Davis and the University of Colorado studied heart muscle cells and skeletal muscle fibers exposed to triclosan in test tubes. They applied electrical stimulation, which would normally make the muscles contract, but the triclosan seemed to impair two proteins involved in contractions, causing the skeletal and cardiac fibers to fail at the cellular level.

The team also tested two groups of live animal subjects. They exposed sedated mice to the chemical and observed up to a 25 percent reduction in heart function levels within 20 minutes. And to mimic the effect of triclosan in marine environments, the researchers exposed fathead minnows to the chemical in the water for seven days. The exposed fish showed significantly diminished swimming ability compared to controls, the researchers reported in a study in the Proceedings of the National Academy of Sciences.

"We have shown that triclosan potently impairs muscle functions by interfering with signaling between two proteins that are of fundamental importance to life," UC Davis researcher Isaac Pessah said in a statement from the university. "Regulatory agencies should definitely be reconsidering whether it should be allowed in consumer products."

The researchers noted that more testing is needed to fully understand the chemical's effect on humans, but they say their findings suggest triclosan could have negative consequences for animal and human health at current levels of exposure. Federal environmental data has shown that the chemical turns up in waterways, algae, fish and dolphins, as well as in human urine, blood and breast milk.

Beyond potential health hazards, the effectiveness of using soaps that contain triclosan has been disputed. Outside of hospitals, triclosan may not be needed to get rid of potentially harmful bacteria and some researchers have warned that widespread use of the chemical may lead to the evolution of bacteria that are resistant to it.