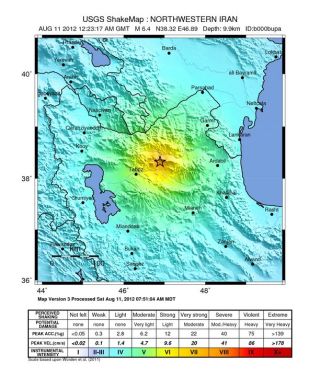 This map shows the shaking intensity from the magnitude 6.4 earthquake that struck Ahar, Iran on Aug. 11, 2012.
(Image: © USGS)

Aftershocks are still rumbling through northwest Iran after two large quakes on Saturday (Aug. 11) killed 306 people and injured more than 3,000, according to official reports.

The 6.3- and 6.4-magnitude quakes, which occurred about six miles (10 kilometers) apart, were not unusual for the region ? it has experienced seven quakes of magnitude 6 or above over the past 40 years, according to the U.S. Geological Survey.

Northwest Iran is seismically active even though it is not on a boundary between two tectonic plates, said Gavin Hayes, a postdoctoral researcher at the USGS National Earthquake Information Center in Colorado.

"This part of Turkey and Iran is a very high plateau that has basically been uplifted because of the convergence between the Arabia and Eurasian plates," Hayes told OurAmazingPlanet. "It's an area that has a lot of faults and has had a lot of seismic activity in the past."

Tectonic plates are chunks of the Earth's crust that rub and push against one another, resulting in earthquakes. The Arabia plate makes up much of the boot-shaped peninsula of Saudi Arabia, Yemen and Oman, and it stretches north of Syria and Iraq into southern Turkey. This plate is moving northward into the Eurasian plate, which covers most of Europe and Asia.

The Saturday quakes were oblique strike-slip quakes, meaning the ground on either side of the faults moved mostly horizontally. The quakes were also shallow, Hayes said, which intensified the feeling of shaking at ground level.

Aftershocks in the magnitude-4 range are to be expected after quakes of this size, Hayes said. The smaller quakes could continue for weeks or months.

Earthquakes in the region aren't likely to get larger than magnitude 7 or so, Hayes said, but poor construction practices in this part of the world mean that even a magnitude-6 or -7 quake can be very destructive. News reports have shown villages reduced to rubble in the wake of the twin quakes.

"Immediately after these earthquakes, with the size and location that they occurred, we knew that there would probably be upward of several hundred fatalities, unfortunately," Hayes said.