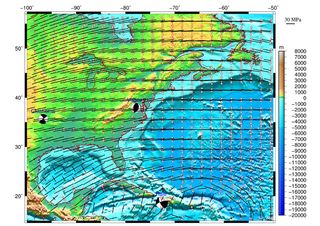 Mechanisms for the recent Virginia and Oklahoma earthquakes that occurred within the North American plate, and the 2010 Haiti Earthquake that occurred on the plate boundary between the North American and Caribbean plates. Crustal stresses predicted by our models, which account for both shallow and deeper density sources, are consistent with the directions of crustal compression experienced in these earthquakes. These stress solutions provide clues about the sources of deformation within the plate boundary zones, and about the ultimate causes of crustal strain within plates.
(Image: © © Science/AAAS)

Computers may now be better than ever at revealing how the giant plates of rock that we live on will drift, crash and dive against each other to shape Earth throughout its history, scientists say.

The findings of a new study on a plate tectonics model could help better understand the factors driving earthquakes, the formation of mountains and the rifting of continents, the researchers said.

Computer models that simulate the motions of the tectonic plates that make up Earth's crust are continually becoming more powerful. Still, the specific forces these models have to account for in order to accurately predict how the plates behave has been controversial. Some models look at stresses within the plates alone, or plate motions alone, or both plate motions and plate stresses together.

Now scientists have a new model that is highly accurate at predicting the motions of plates, the way in which plate boundaries deform and stresses within plates. This model focuses on where the mantle flows — the layer of fluid-like hot rock underneath the crust — drives or resists the motion of overlying plates.

The model has a particular focus on the upper part of the mantle, reaching up to 125 miles (200 kilometers) below the Earth's surface, but it accounts for variations in viscosity and flow all the way down to the core-mantle boundary. It can quantify the resistance that occurs when one layer of fluid moves over another, a parameter that has been notoriously difficult to predict for Earth's interior.

"It is surprising and exciting to see how well the simple model predicts," researcher Attreyee Ghosh, also a Stony Brook geophysicist, told OurAmazingPlanet.

The model promises to shed light on the factors behind earthquakes and other monumental forces of nature.

"The majority of the world's earthquakes occur along plate boundaries," Ghosh explained. "However, there are occasional earthquakes within the interior of the Earth's plates, as the tectonic plates are under constant stress. The source of these stresses that drive plate tectonics has remained controversial. The origin and magnitude of such stresses is key to understanding the processes of mountain-building, continental breakup and the mechanics of earthquakes."

Ghosh noted that many other researchers have argued that a major factor such models should account for is the pulling force exerted by plates that dive down into the mantle, called subduction.

"We argue that this pulling force may not be as important in driving the plates as has been thought. Instead, the large-scale flow in the mantle produced by this subduction may be more important," Ghosh said. "However, we have not tested whether including the 'slab pull' force will improve things. So, we cannot rule out the existence of this force."

Ghosh and Holt detail their findings in tomorrow's (Feb. 17) issue of the journal Science.