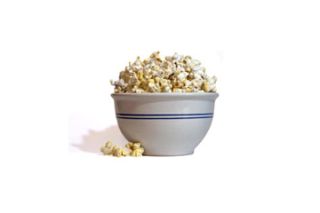 When diacetyl, a chemical used in butter flavoring, was linked to lung damage in workers at microwave popcorn factories, some manufacturers started using a different ingredient. But new research suggests this substitute, known as 2,3-pentanedione (or PD), is just as toxic.

In the study, scientists exposed groups of lab rats to PD, diacetyl or filtered air for six hours. The rats exposed to PD had damage to the airway lining in the upper nose comparable to the harm caused by diacetyl in the 12 to 14 hours after exposure, the researchers found.

This type of damage is believed to be the underlying cause of bronchiolitis obliterans, or the disease associated with "popcorn worker's lung," explained researcher Ann Hubbs, of the National Institute for Occupational Safety and Health (NIOSH).

In further evidence of PD's toxicity, Hubbs and her team found that the chemical seemed to alter gene expression in the rats. Exposure activated caspase 3, a protein that plays a role in cell death, in axons of olfactory nerve bundles. It also was linked to decreased expression of a protein involved in restoring oxygen to tissues in the olfactory bulb, striatum, hippocampus and cerebellum, the researchers said.

"Our study is a reminder that a chemical with a long history of being eaten without any evidence of toxicity can still be an agent with respiratory toxicity when appropriate studies are conducted," Hubbs said in a statement from Elsevier Health Sciences, which published the research in the American Journal of Pathology.

Bronchiolitis obliterans is a life-threatening and nonreversible lung disease with symptoms that include shortness of breath and wheezing. When associated with popcorn, the disorder is usually confined to factory workers who are inhaling the diacetyl fumes of hundreds of bags of microwave popcorn per day. But one man who ate at least two bags of microwave popcorn each night reportedly came down with the disease.

Earlier this month, a study published in the journal Chemical Research in Toxicology reported that diacetyl might damage more than just the lungs. Researchers found that the food flavoring ingredient might increase beta-amyloid clumping in the brain, a hallmark of Alzheimer's disease.