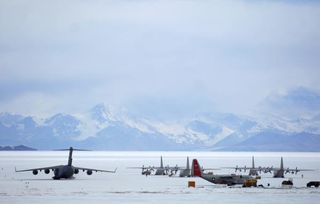 A rescue air mission to evacuate a person with a medical emergency from Antarctica was due to land back in Christchurch, New Zealand, at 2 a.m. EDT today (Aug. 9), according to Reuters.

The mission was mounted to evacuate the patient, who may require more care than can be given at America's McMurdo Station, the U.S. National Science Foundation (NSF) has said in a statement.

The patient, whose name is not being released by the NSF, has an undisclosed medical problem that the NSF says may require "immediate corrective surgery." Though the patient was in stable condition, officials decided they needed to be at a more capable medical facility. McMurdo's medical capabilities are on par with an urgent-care center, the NSF said, and it "is not equipped for the type of procedure being contemplated."

The Australian Antarctic Division (AAD) dispatched a specialist medical team and an A319 airbus to Christchurch, New Zealand. From there they flew to McMurdo Station, an American research base on the frozen continent.

The Australian team was called in because there are no U.S. aircraft positioned to respond quickly, the NSF said.

It is currently the tail-end of winter in Antarctica, so the sun is just beginning to shine light above the horizon. The emergency flight landed on McMurdo's ice runway, called Pegasus, which is one of only a handful of runways in Antarctica that can handle wheeled aircraft, the NSF statement noted.

Flights to Antarctica are typically suspended for the winter because of the total darkness and the dangerous and unpredictable winter weather.

In August 2011, Renee-Nicole Douceur, the manager of the Amundsen-Scott South Pole Station, suffered a stroke and had to remain at the base for several months because officials said it was too dangerous to send a flight to pull her out. A rescue flight eventually landed in October 2011.

This current rescue flight is happening before a set of scheduled late-winter supply flights that help the station gear up for the summer research season. Only about 1,000 people overwinter at various countries' stations on Antarctica, significantly less than the nearly 4,000 that come to the continent for research in the summer.