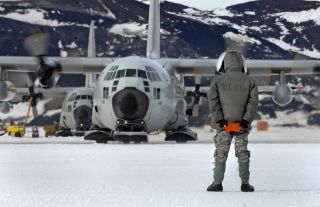 Tech. Sgt. Kevin Call waits to marshal an LC-130 Hercules from its parking spot on the annual sea ice runway near McMurdo Station, Antarctica in 2007. LC-130s are equipped with skis and wheels so they can land on Antarctica's sea ice runways.
(Image: © U.S. Air Force photo/Tech. Sgt. Shane A. Cuomo)

Renee-Nicole Douceur, the manager of the Amundsen-Scott South Pole Station, suffered a stroke in August. She remains at the U.S. research station due to its remoteness and the extreme weather that hits the ice sheet in the austral winter. Officials say it has been too dangerous to send in a rescue plane.

The research station does have medical personal on hand, and Douceur, 58, has been giving interviews to the media, suggesting that she is coping. Still, medical officials and her family want her back home as soon as possible. [Extreme Living: Scientists at the End of the Earth]

A cargo plane is tentatively scheduled to take off from there Oct. 17, weather permitting.

A rescue plane leaving Amundsen-Scott Station would have to fly to McMurdo Station, on the Antarctic coast, and then to Christchurch, New Zealand. But Antarctica's harsh winter weather is notoriously unpredictable, making any rescue attempt particularly dangerous.

"You can get a good forecast and come into McMurdo and think you're landing, and suddenly there is 60-mph winds," said Air National Guard Col. Ronnie Smith, who flew missions at the South Pole for 12 summer seasons. Smith now works at Scott Air Force Base in St. Clair County, Ill.

Antarctica is not only the coldest continent but the driest, highest and windiest, according to the CIA World Factbook. Thecoldest temperature on Earth was recorded there in 1983, when the outside air hit minus 129 degrees Fahrenheit (minus 89 Celsius) at Vostok Research Station, which sits at the center of the East Antarctic Ice Sheet, about 800 miles (1,300 kilometers) from the geographic South Pole. The continent is so cold that if plane engines are turned off during winter, the fuel can freeze into a jelly.

Antarctica is now at the tail end of its winter season, which begins in mid-February and lasts until around late October, when spring begins and flights to the South Pole typically resume.For now, however, it's still too dark, cold and windy to safely land or take off on the continent, officials have said.

The National Science Foundation runs the United States' polar programs.Referring to Douceur's situation, NSF spokeswoman Deborah Wing said in a statement: "In considering whether to attempt a very risky emergency medical evacuation during the challenging winter season in Antarctica, NSF must always balance the patient's condition with the possibility for injury or the loss of life of the patient, the flight crew and personnel on the ground at South Pole."

The U.S. Antarctic Program operates four airfields from late winter through the austral summer season. These are not your typical runways. The Pegasus White Ice Runway, for example, sits on a 110-foot-thick (34 meters) glaciated shelf with several inches of snow on top.

During the winter, the continent is dark 24 hours a day. The runways do not have permanent lights because they are on ice. Landings and takeoffs can be dangerous even when the sun is shining on the runways; wind can kick up snow and block pilots' vision.

During a white-out landing, pilots must land in a part of the Antarctic sea ice runway that has been surveyed and known to be clear of any hazards. Essentially, the pilots land blind.

Even the best forecasts can't predict how the Antarctic weather will change. McMurdo Station is nearly 10,000 feet (3,000 meters) above sea level, where a column of extremely cold air often will suddenly sink and roll over the terrain, picking up speed and whipping up winds.

"You can have almost an instantaneous hurricane wind," Smith told OurAmazingPlanet. "Seventy miles per hour [113 kph] is nothing. It can be up to 100 mph [160 kph], no problem."

Research continues year-round on Antarctica nevertheless. In the summer, the human population of the fifth-largest continent swells to beyond 4,000, by the CIA's count, as researchers and support crews launch missions from Antarctic research stations. In the winter, about 1,000 people remain to brave temperatures as low as minus 94 F (minus 70 C).

Current weather at Amundsen-Scott is mostly clear with ice crystals and mist. Visibility is two miles (3.2 km). The temperature is minus 76 F (minus 60 C), with a wind chill of minus 110 F (minus 79 C), according to the U.S. National Oceanic and Atmospheric Administration.

Raytheon Polar Services, the company that manages the station through a contract with the NSF, said it plans to fly a cargo plane from the South Pole to McMurdo Station on Oct. 17, weather permitting, the New York Times reported. If Douceur's medical condition allowed her to board it, she might fly to New Zealand from there for further treatment.