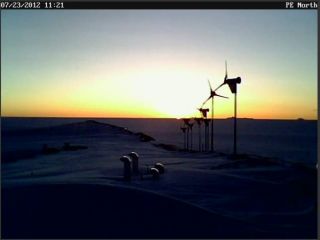 A lonely webcam at an Antarctic station recently captured images of the first sunrise to light the sky in two months, marking the end of winter darkness in its neighborhood of East Antarctica.

Although there were no human eyes to witness the return of the light, on July 15, operators back in Belgium got a signal that the hold of the winter darkness was broken. On that day, five of the station's Sunny Boys — contraptions that convert energy collected by the station's solar panels into usable form — woke up from their winter slumber.

And on July 23, a webcam set up at the station, deserted for winter, sent back images of a rose-gold glow suffusing the horizon.

A zero-emissions compound, the Princess Elisabeth Station relies on wind and solar energy for all its power, which it continues to collect even when people aren't there to use it. During the darkness of winter, Antarctica's ferocious winds spin the station's herd of wind turbines; already, the station's solar panels have seen enough sunlight to begin building up wattage ahead of the summer research season.

The gleaming station, which opened in 2008, looks like the perfect setting for a science fiction movie — all silvery, graceful angles amid a desolate and glittering landscape.

Built as a joint project between the Belgian government and a private, nonprofit organization, the International Polar Foundation, which oversees operations, the station stands atop a rocky ridge in East Antarctica, about 137 miles (220 kilometers) from the coast.

The station was shuttered for winter on Feb. 27, and humans won't return until November, when austral summer arrives. Tens of scientists spend the warmer months at Princess Elisabeth, conducting research in a host of disciplines from microbiology to seismology to glaciology.

Farther inland, the continent is still shrouded in darkness. At Concordia Station, a European outpost in the middle of the East Antarctic Ice Sheet where residents recently snapped a bright aurora shimmering overhead, the sun won't rise until sometime in August.