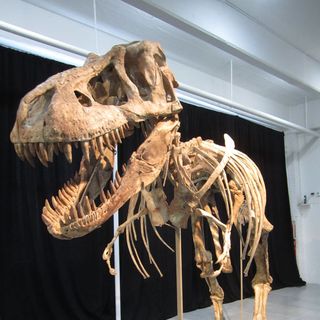 A tyrannosaur may be headed for trial.

A Florida fossil dealer who attempted to sell a fossilized tyrannosaur skeleton at an auction before Mongolia's president intervened has made it clear he wants it back.

The dinosaur, a Tarbosaurus bataar, is now the subject of a federal lawsuit filed by the Manhattan U.S. Attorney's office seeking to take ownership of the dinosaur so it can be returned to Mongolia, from which paleontologists and Mongolia President Elbegdorj Tsakhia say it was taken illegally.

In a court filing on July 27, fossil dealer Eric Prokopi put the feds on notice that he plans to fight their attempt to take over ownership of it.

A claim on the fossils

According to the new claim he filed, Prokopi "purchased components of the (tyrannosaur) on the international market and then spent a year of his life and considerable expense identifying, restoring and mounting and preparing it." [Album: Battle over a Tarbosaurus]

The document refers to the dinosaur fossils as a "display piece."

"We are just trying to create a factual distinction between a fossil which is imported and a finished piece which is what was being sold at the auction," McCullough said.

Although the fossils fetched nearly $1.1 million at auction, the sale did not go through because of the Mongolian claim on the fossils. Paleontologists have supported this claim, saying that clearly identifiable remains for Tarbosaurus bataar, an Asian relative of T. rex, are only known to have come from a rock formation located within Mongolia.

Prokopi has questioned that, writing in a statement to the media in June that the bones could have come from elsewhere. "Other than (from) the diggers, there is no way for anyone to know for certain when or where the specimen was collected."

"I'm just a guy in Gainesville, Florida, trying to support my family, not some international bone smuggler," he wrote.

Had no one put in a claim on the fossils, the federal government would have taken legal possession of them without a trial. Preet Bharara, U.S. Attorney for the Southern District of New York, has declared his intention to return the dinosaur to Mongolia.

Anyone else with an interest in the dinosaur has until Aug. 26 to file a claim.

According to customs documents, the fossils were shipped to Prokopi in 2010 from Chris Moore, of Forge Fossils in England. Moore would have split the proceeds of the sale with Prokopi, according to a consignment contract with Heritage Auctions, the auction house that offered the dinosaur for sale. Moore has not been named in the federal lawsuit. His attorney, John Cahill, told LiveScience by email: "Mr. Moore is not involved in the case and has no interest in becoming involved in it." [Image Gallery: Dinosaur Fossils]

Prokopi's attorneys McCullough and Peter Tompa declined to discuss the arrangement between the two fossil dealers.

The international legal landscape for fossils is complicated, since laws regarding fossil ownership and export vary by country. For instance, Mongolian law makes fossils found within its boundaries property of the state, but U.S. law allows for the collection and sale of fossils dug up on private land with permission by the land owner. But this case involves probable Mongolian fossils offered for sale in the United States.

"Until this case is tried in court, I don't know if there are any laws that have been broken here in the U.S.," said George Winters, executive director of the Association of Applied Paleontological Sciences (AAPS), a professional organization whose members include commercial dealers and collectors.

Ultimately, Winters said he suspects this case will result in changes to U.S. law.

"I am assuming that the trade agreements with these countries (such as Mongolia, which don't allow for the export of fossils) will at some point in time be amended to possibly ban the sale or importation of that material," he said.

It's not difficult to find fossils from the same species of dinosaur or others quite likely taken from Mongolia and listed in auction catalogs or on eBay.

To help collectors and dealers make sure what they are excavating or buying is legal, Winters is compiling individual nations' laws on fossils for a revised edition of Donald Wolberg's book "Collecting the Natural World" (Geoscience Press, 1997). Winters also plans to post the information on the AAPS journal website.

If you buy or collect fossils abroad, knowing the law of the country you are visiting is important. For example, in China, tourists may legally purchase fossils, but when they attempt to take their purchases home, they may be detained, even jailed, since Chinese law does not permit the export of fossils, Winters said.