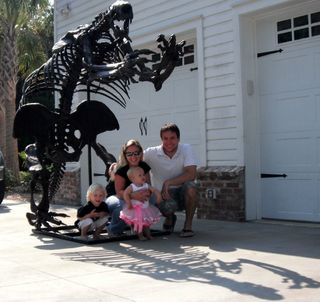 Commercial paleontologist Eric Prokopi of Gainesville, Florida with his wife, Amanda, and their two children in front of one of his earlier restoration projects, the skeleton of a giant ground sloth.
(Image: © Courtesy of Eric Prokopi)

A Florida fossil dealer who prepared the skeleton of a tyrannosaur and attempted to sell it at auction, questions assertions that the fossils were taken illegally from Mongolia, and says the dispute over its ownership has brought financial ruin on his family.

"Imagine watching your house burn down with everything you have in it and knowing you have no insurance," Eric Prokopi, a commercial fossil dealer based in Gainesville, Fla., writes in a lengthy statement issued to reporters today (June 22).

The lost sale of the dinosaur has been devastating, he writes.

The process of preparing the skeleton — which federal agents took into protective custody earlier today — took "thousands of hours and every penny my wife and I had," Prokopi writes. [Gallery: A Dinosaur's Journey]

The two transformed "chunks of rocks and a bunch of broken bones" into an 8-feet-tall and 24-feet-long (2.4 by 7.3-meters) skeleton that went up for public auction through Heritage Auctions on May 20. Mongolian President Elbegdorj Tsakhia attempted to stop the sale, saying the dinosaur, a species called both Tyrannosaurus bataar and Tarbosaurus bataar, was almost certainly taken illegally from his country.

Heritage Auctions sold the fossils for $1.1 million on the condition the courts approve the sale. Since then, the U.S. Attorney for the Southern District of New York has claimed the right to seize the fossils with the intent of returning them to Mongolia. On Friday (June 22), agents took the dinosaur into protective custody until the case is resolved.

Prokopi, who has not responded to requests for comment from LiveScience, writes that his statement is intended to clear up "misconceptions" about the dinosaur fossils.

"I'm just a guy in Gainesville, Florida trying to support my family, not some international bone smuggler like I have been portrayed by some in the media," he writes.

Prokopi and his wife Amanda currently operate a business called Everything Earth with products that include dinosaur fossils. "You might see some of our projects in museums all over the world, movies, or even in high end auction catalogs including Sotheby’s, Bonhams and Butterfield, IM Chait and Heritage," the company’s website reads.

Numerous paleontologists have supported the Mongolian claim to the fossils, saying clearly identifiable Tarbosaurus fossils have only been found in one rock formation, the Nemegt, in Mongolia's portion of the Gobi Desert. (Mongolian law makes vertebrate fossils found within its borders state property.)

Prokopi questions this, saying Tarbosaurus fossils have been found elsewhere, though he does not elaborate.

"It's certainly possible a new locality with complete specimens was discovered in another country," he writes. "Just because it is unknown to professional paleontologists now doesn't mean it is not possible."

Prokopi writes he purchased the bones without being certain of where they were collected.

"Other than (from) the diggers, there is no way for anyone to know for certain when or where the specimen was collected," he writes.

A Facebook post, dated June 3, suggests Prokopi has knowingly sold fossils from Mongolia. The post, for a charity auction to support a Florida montessori school, describes a donation by the Prokopis as an "80 million year-old Tyrannosaurus rib section found in Omnogov, Mongolia." [Image Gallery: Dinosaur Fossils]

In fact, the U.S. Attorney's case hinges on claims Prokopi knew the fossils were stolen when importing them, and made false statements on customs forms when importing the fossils — listing their country of origin as Great Britain rather than Mongolia, undervaluing them and inaccurately describing them.

Prokopi denies making false claims on the customs forms, and specifically addresses the charge he misrepresented the skeleton's value.

According to the federal complaint, the customs forms state the fossils have a value of $15,000, far below the $950,000 to $1.5 million estimated value listed in Heritage Auctions' catalog.

“When I acquired the Tyrannosaurus bataar and it was imported to the United States, the value was declared much lower than the auction value because, quite simply, it was loose, mostly broken bones and rocks with embedded bones,” he writes.

He concludes: "All I can do now is hope and pray the American legal system will uphold American laws and not sacrifice my rights and freedoms to please a foreign government out for a political trophy."