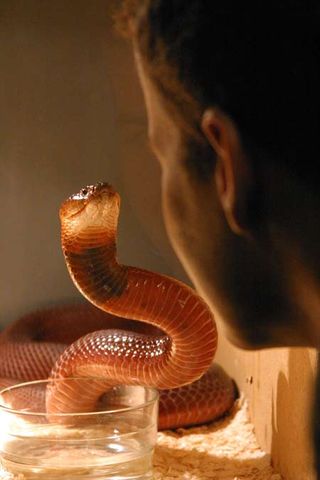 There are countless animals on this planet that can cause harm to humans, but some of the deadliest may not be those you expect. Forget great white sharks, which kill very few people. Forget lions, tigers and bears. Here are five creatures you should really fear, either because of the sheer number of deaths they cause or their sneaky tactics:

Box Jellyfish: The size of a soccer ball, this gelatinous killer has up to 60 tentacles, each 15 feet long. Each tentacle has 5,000 stinging cells and enough toxin to kill 60 people. And they do. No official records exist exist, but experts estimate that more than 100 people are killed each year by stings from the several species of box jellyfish around the globe. As many as 40 people are killed by box jellyfish annually in the Philippines alone, according to an estimate by the U.S. National Science Foundation.

Asian Cobra: While the Asian Cobra is not the most venomous snake, its prevalence and stealth tactics lead to several thousand human deaths every year. Interestingly, there is no official record of snakebite deaths worldwide. Estimates for global snakebite deaths range from around 20,000 to 125,000 a year. Most occur in South Asia, Southeast Asia, and sub-Saharan Africa. Some cobras also spit their blinding venom into the eyes of unwary humans with, well, blinding accuracy.

Scorpions: Scorpions are estimated to kill as many as 3,250 people a year, with 1.2 million total stings. Most of the deaths occur in underdeveloped tropical countries. The icky thing about scorpions is the way they hide out and come out typically only at night. You’re likely to be bitten before you see one. That’s not good when their hiding spot is a pair of shorts or the inside of a shoe. There are some 25 scorpion species that can kill a person.

Mosquitoes: The smallest creature on this list kills far more people than all the others combined. In the Western world, a mosquito bite is usually just an itchy annoyance. But some mosquitoes carry and transfer malaria-causing parasites. Malaria deaths are not always accurately reported, but the World Health Organization estimates that malaria killed between 537,000 and 907,000 people in 2010, mostly among children under age 5 in Africa.

Elephants: Who knew? Elephants kill more than 500 people a year worldwide. And there’s not much finesse to it. Adult African elephants weigh about 16,000 pounds, and if a simple stomp doesn’t do the trick, the sharp tusks will. But this list of deadly animals wouldn’t be complete without mentioning us: Human poachers are thought to have killed tens of thousands of elephants last year alone, according to the Convention on International Trade in Endangered Species of Wild Fauna and Flora.