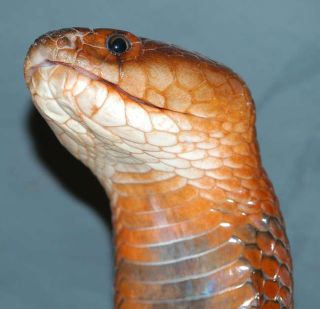 All cobras are venomous, but the aptly named spitting cobra goes one step further to spray blinding venom from its fangs at would-be predators.

Remarkably, these serpents can hit a victim's eyes from more than 5 feet (1.5 m) away even as they are moving with roughly 90-percent accuracy. It turns out these snakes achieve their extraordinary aim by predicting where their targets are going to be in roughly half the time it takes to blink an eye.

To analyze how these reptiles were such dead shots, functional morphologist Bruce Young at the University of Massachusetts at Lowell stood behind a sheet of plastic and recorded the venom sprays of spitting cobras in South Africa as they aimed for his eyes.

Curiously, the snakes wiggled their heads right before letting fly. A colleague of Young, herpetologist Guido Westhoff at the University of Bonn in Germany, had also seen this head shake in the cobras, so the researchers and their colleagues worked together to figure out what it might accomplish.

To provoke the serpents to spit, "I just put on the goggles and the cobras start spitting all over," Young said. He also donned a visor fitted with accelerometers to track his head movements. At the same time, the other researchers filmed the cobra's movements at 500 frames per second, or roughly 20 times faster than the average camera speed.

For six weeks, Young taunted the snakes by weaving his head about in front of them, triggering more than 100 spits. When they analyzed Young's movements, they found that 200 milliseconds before the cobras spat, Young suddenly jerked his head, the movement that must have set the serpents off.

In that fifth-of-a-second time after the head jerk — roughly half the time it takes to blink an eye — the snake predicts where the victim is going to be, the researchers figure. During that split-second, the snake also wiggled its head the same way the target's eyes moved in order to accurately guide the venom stream. The snake also moves its head slightly while spraying the venom to spread it out over space for a better chance to hit the eye.

"All they need is one tiny fraction of the venom to hit the cornea, one little droplet," Young said. "I've seen what happens even when dilute venom hits the cornea. It's basically instantly incapacitating."

This ability to intercept a moving target with such accuracy suggests a level of braininess not attributed to snakes or other reptiles previously, the researchers noted.

"There's probably a lot more complexity among snakes when it comes to neural processing and sensory systems than we generally recognized," Young told LiveScience. "For instance, while cobras seem dominated by their sense of vision, we can see if rattlesnakes, which tend to live in a world dominated by smell and sometimes heat, have any equivalent behavior."

The scientists detailed their findings May 14 in the Journal of Experimental Biology.