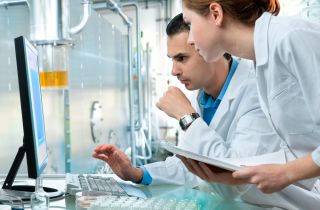 Empirical evidence is information acquired by observation or experimentation. Scientists record and analyze this data. The process is a central part of the scientific method.

The scientific method begins with scientists forming questions, or hypotheses, and then acquiring the knowledge through observations and experiments to either support or disprove a specific theory. "Empirical" means "based on observation or experience," according to the Merriam-Webster Dictionary. Empirical research is the process of finding empirical evidence. Empirical data is the information that comes from the research.

Before any pieces of empirical data are collected, scientists carefully design their research methods to ensure the accuracy, quality and integrity of the data. If there are flaws in the way that empirical data is collected, the research will not be considered valid.

The scientific method often involves lab experiments that are repeated over and over, and these experiments result in quantitative data in the form of numbers and statistics. However, that is not the only process used for gathering information to support or refute a theory.

"Empirical evidence includes measurements or data collected through direct observation or experimentation," said Jaime Tanner, a professor of biology at Marlboro College in Vermont. There are two research methods used to gather empirical measurements and data: qualitative and quantitative.

Qualitative research, often used in the social sciences, examines the reasons behind human behavior, according to Oklahoma State University. It involves data that can be found using the human senses. This type of research is often done in the beginning of an experiment.

Quantitative research involves methods that are used to collect numerical data and analyze it using statistical methods, according to the IT University of Copenhagen. Quantitative numerical data can be any data that uses measurements, including mass, size or volume, according to Midwestern State University, in Wichita Falls, Texas. This type of research is often used at the end of an experiment to refine and test the previous research.

Identifying empirical evidence in another researcher's experiments can sometimes be difficult. According to the Pennsylvania State University Libraries, there are some things one can look for when determining if evidence is empirical:

The objective of science is that all empirical data that has been gathered through observation, experience and experimentation is without bias. The strength of any scientific research depends on the ability to gather and analyze empirical data in the most unbiased and controlled fashion possible.

However, in the 1960s, scientific historian and philosopher Thomas Kuhn promoted the idea that scientists can be influenced by prior beliefs and experiences, according to the Center for the Study of Language and Information.

Because scientists are human and prone to error, empirical data is often gathered by multiple scientists who independently replicate experiments. This also guards against scientists who unconsciously, or in rare cases consciously, veer from the prescribed research parameters, which could skew the results.

Empirical laws and scientific laws are often the same thing. "Laws are descriptions — often mathematical descriptions — of natural phenomenon," Peter Coppinger, associate professor of biology and biomedical engineering at the Rose-Hulman Institute of Technology, told Live Science. Empirical laws are scientific laws that can be proven or disproved using observations or experiments, according to the Merriam-Webster Dictionary. So, as long as a scientific law can be tested using experiments or observations, it is considered an empirical law.

Empirical, anecdotal and logical evidence should not be confused. They are separate types of evidence that can be used to try to prove or disprove and idea or claim.

Logical evidence is used proven or disprove an idea using logic. Deductive reasoning may be used to come to a conclusion to provide logical evidence. For example, "All men are mortal. Harold is a man. Therefore, Harold is mortal."

Anecdotal evidence consists of stories that have been experienced by a person that are told to prove or disprove a point. For example, many people have told stories about their alien abductions to prove that aliens exist. Often, a person's anecdotal evidence cannot be proven or disproven.