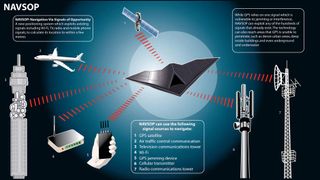 Military drones, ships, troops and missiles that rely upon GPS navigation to find and strike enemy targets can run into trouble if enemies jam the GPS signals. A new navigation system can bypass the problem by plucking any electronic signal out of the air to figure out locations — even using the signals from GPS jammers.

The technology made by defense company BAE Systems is able to not only use hundreds of different TV, Wi-Fi, or cell phone signals to triangulate the location of a person or vehicle, but can also learn from previously unidentified signals. That could protect U.S. military drones from both jamming and GPS "spoofing" that uses bogus signals to hack and take control of drones or other robots.

"This technology is a real game-changer when it comes to navigation, which builds upon the rich heritage that both BAE Systems and the U.K. have in radio engineering," said James Baker, managing director at BAE Systems Advanced Technology Centre.

Scavenging signals from the air also allows BAE's Navigation via Signals of Opportunity (NAVSOP) system to work indoors or deep underground — places where GPS has traditionally failed because satellite signals can't reach them.

NAVSOP can also work in remote locations far from civilization such as the deep jungle or in the Arctic.

But the technology could do much more than just harden military weapons and vehicles against enemy jamming or hacking attempts — it could protect tomorrow's self-driving robot cars from being hacked. Trucks, ships and airplanes that use GPS could similarly benefit from having a jam-proof, reliable form of navigation.

On a more personal level, NAVSOP could lead to the equivalent of indoor GPS for firefighters trying to rescue people inside smoke-filled buildings, miners working underground or cave explorers who don't want to fall off the grid.