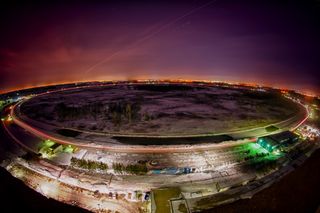 Findings from the Tevatron particle accelerator at Fermilab in Illinois suggest physicists are close to finding the long-sought Higgs boson particle.
(Image: © Fermilab)

American scientists have found strong hints that the rumored Higgs boson particle exists, and has been created inside an atom smasher in Illinois.

The news comes just days before big news on the search for the Higgs is expected to be delivered by physicists from the world's largest particle accelerator, the Large Hadron Collider (LHC).

"This is a very exciting week — it may be the most exciting week in physics since I became a physicist," Joe Lykken, a theoretical physicist at the Fermi National Accelerator Laboratory (Fermilab) in Batavia, Ill., said during a news conference today (July 2).

The Higgs boson, also called the "God particle," is thought to explain why other particles have mass. The idea is that a related energy field, called the Higgs field, permeates space, and that as particles pass through this field their interactions with it confer mass on them, like a spoon being dragged through molasses. [Top 5 Implications of Finding the Higgs Boson]

Fermilab scientists announced today that they've narrowed down the possible range of masses the Higgs particle can have, if it exists, to between 115 and 135 gigaelectron volts (GeV), a unit roughly equivalent to the mass of a proton. The findings are the result of a long and thorough analysis of particle collisions inside Fermilab's Tevatron accelerator. The machine, the biggest atom smasher in the United States, was shut down in 2011, but scientists are still poring through its measurements.

Now the Tevatron has been eclipsed by the larger and more powerful LHC, a17-mile (27 kilometer) underground loop beneath Switzerland and France. LHC scientists are due to announce the latest results from their search for the Higgs on July 4 at the International Conference on High Energy Physics in Melbourne, Australia.

Scientists have hinted that the LHC has come close to finding the Higgs boson, but that they aren't quite ready to announce its discovery.

"I know that 2012 is the year; I can't tell you that July is the month," said Tom LeCompte, a physicist at Illinois' Argonne National Laboratory, and a member of LHC's ATLAS experiment.

Last December, LHC scientists announced that they'd seen hints of what could be the Higgs boson in an excess of particles weighing around 124 or 125 GeV. Yet the researchers hadn't collected enough data to say for sure if the blip represented the Higgs particle or if the pattern could have been a statistical fluke.

To claim a true discovery in science, physicists wait until their statistics reach the level of "five sigma," meaning there is a one in 3.5 million chance the signal isn't real.

Currently, the Tevatron results suggest the existence of the Higgs, but aren't quite that certain.

"We're close to 3 sigma," said Fermilab research Rob Roser, a cospokesperson for Tevatron's CDF experiment."What that means is I'd be willing to bet your house, but not mine. At 5 sigmas, I'll bet my own house."

Still, the Fermilab team's findings are enough to qualify as the strongest claim to date for the existence of the Higgs. While the LHC was able to reduce the possible mass range for the particle to an even narrower window, it did so with less certainty.

However, that could change come Wednesday.

The LHC results will be announced July 4 at 3 a.m. EDT (9 a.m. CEST), and will be webcast live here: http://webcast.web.cern.ch/webcast