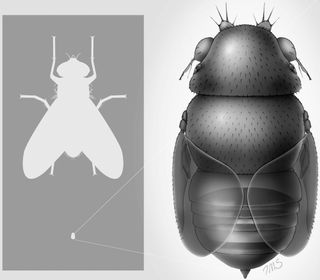 A reconstruction of the tiny phorid fly Euryplatea nanaknihali, with body size compared with a house fly (Musca domestica). This family of flies is known for laying eggs in living ants.
(Image: © © Inna-Marie Strazhnik)

A new fly discovered in Thailand is the world's smallest. It is five times smaller than a fruit fly and tinier than a grain of salt (0.4 millimeters) in length — half the size of the smallest "no see-ums." It probably also feeds on tiny ants, likely decapitating them and using their head casings as its home.

"It's so small you can barely see it with the naked eye on a microscope slide. It's smaller than a flake of pepper," said Brian Brown, of the Natural History Museum of Los Angeles County, who identified the fly as a new species. "The housefly looks like a Godzilla fly beside it."

The tiny finding is detailed in the July 2012 issue of the journal Annals of the Entomological Society of America.

The type specimen, a female, was picked up by the Thailand Inventory Group for Entomological Research in Kaeng Krachan National Park. The fly is the first of its kind discovered in Asia. [Microscopic Monsters: Gallery of Amazing Bugs]

It has smoky gray wings and the female they discovered has an egg-depositing organ that is pointed to make it easy to lay eggs inside another insect, as a parasitic fly would. While it's not the smallest insect (that title belongs a species of fairy wasp, coming in at 0.14 millimeters in length, about the size of a human egg cell), it is the world's smallest fly.

"When you get really small like that, the environment changes," Brown said. "The viscosity of air starts to become a problem and wind currents are major events. It's amazing how small something can be and still have all of its organs. This is a new frontier, and publishing this tiny fly is basically a challenge to other people to find something smaller," he said.

The researchers named the new fly Euryplatea nanaknihali. It comes from a group of 4,000 hump-backed flies called phorid flies. One genus of the fly, Pseudacteon, is known for its anti-ant behaviors, which include decapitation. They usually range from 0.04 inches to 0.12 inches (1 millimeter to 3 millimeters) in length, so they can only prey on larger ants.

The flies lay their eggs in the body of the ant; the eggs develop and migrate to the ant's head where they feed on the huge muscles used to open and close the ant's mouthparts. They eventually devour the ant's brain as well, causing it to wander aimlessly for two weeks. The head then falls off after the fly larva dissolve the membrane that keeps it attached.

The fly then takes up residence in the decapitated ant head for another two weeks, before hatching out as a full-grown adult. In this case, researchers think the fly parasitizes tiny acrobat ants, whose heads are about as large as the fly itself and grow to about 0.16 inches (4 millimeters) long.

They haven't been able to see this in action, but think it's likely in the newfound fly since the fly's closest relative decapitates ants in Equatorial Guinea.