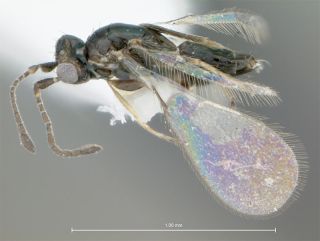 The fairyfly wasp, Gonatocerus ater, lays its eggs inside the eggs of leafhoppers; once hatched, the wasp larvae snack on the leafhopper eggs..
(Image: © Jason Mottern, UC Riverside Department of Entomology.)

A tiny wasp with iridescent wings showed up in upstate New York in 2010. Just one year later it was spotted in Irvine, Calif. — suggesting the fairyfly wasp is now well established in the United States within a year of sneaking into the country, a scientist says.

"This wasp was accidentally introduced in North America," said Serguei Triapitsyn of  the University of California-Riverside, who made the initial discovery but wasn't able to positively identify the species until two weeks ago.

The fairyfly wasp, Gonatocerus ater, is a millimeter (0.04 inches) long. It lays its eggs inside the eggs of plant-eating insects called leafhoppers, which in turn lay their eggs inside plant tissue. When the fairyfly wasp eggs hatch, the little larvae munch on what is essentially the womb: the leafhopper eggs.

Triapitsyn, director of California-Riverside's Entomology Research Museum, said it is likely the wasp eggs were carried inside leafhopper eggs that were in twigs of Lombardy poplar seedlings coming from Europe. In fact, reports of the wasp in Italy suggested the leafhopper Rhytidodus decimaquartus was the wasp's host.

"In California, we do not know if the wasp's host is this leafhopper, but I found it on the same Lombardy poplar trees that had the wasp, so an association is very likely," he said.

Triapitsyn found the wasp species in August 2011 while doing fieldwork and brought  samples back to his lab.

"I identified the wasp as Gonatocerus ater by comparing it to wasps from upstate New York and also Europe," he said. "It would not surprise me if this wasp is found wherever Lombardy poplars are located, because it's likely leafhopper host prefers these trees for feeding."

Though a relative newcomer, the wasp poses no known risk in the U.S., at least to humans. For leafhoppers, that's another story, as the wasp kills leafhopper larvae within their eggs.

Editor's Note: This article was updated to correct a metric conversion.