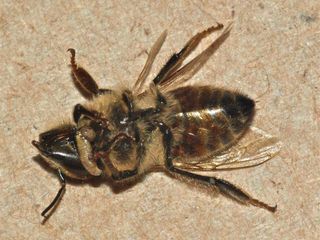 An A. borealis larvae crawls out of a dead honeybee.
(Image: © John Hafernik)

If deadly viruses and fungi weren't enough, honeybees in North America now must also deal with a fly parasite that causes them to leave their hive and die after wandering about in a zombie-like stupor, a new study shows.

Scientists previously found that the parasitic fly, Apocephalus borealis, infects and ultimately kills bumblebees and paper wasps, while the "decapitating fly," an insect in the same genus, implants its eggs in ants, whose heads then pop off after the fly larvae devour the ants' brains and dissolve their connective tissues. Now researchers have discovered honeybees parasitized by A. borealis in 24 of 31 sites across the San Francisco Bay area, as well as other commercial hives in California and South Dakota.

Genetic tests revealed that some of the bees and flies were infected with deformed wing virus and the fungus Nosema ceranae, both of which have been implicated in colony collapse disorder (CCD). The scientists believe that more research into the parasitized bees and their behavior could yield new insights into the devastating disorder.

"Understanding causes of the hive abandonment behavior we document could explain symptoms associated with CCD," the researchers write in their study, published today (Jan. 3) in the journal PLoS One.

The female A. borealis flies will inject their eggs into a honeybee's abdomen soon after coming into contact with the bee, the researchers saw in their laboratory. About seven days later, up to 25 mature fly larvae emerge from the area between the bee's head and thorax. In the wild, no more than 13 larvae were observed busting from a single honeybee.

The researchers found that parasitized bees in the wild abandon their hives and congregate near light sources, where they begin to behave strangely. A bee near death typically will sit in one place and curl up, but these infected bees walked around in circles, appearing disoriented and with little equilibrium, often not being able to stand up.

"They kept stretching [their legs] out and then falling over," Andrew Core, biology graduate student at San Francisco State University and co-author of the study, said in a statement. "It really painted a picture of something like a zombie."

Core and his colleagues found that the honeybees most likely to become infected by the parasite were the ones that left their hives to forage at night, rather than the daytime foragers. The researchers also discovered fly pupae near dead bees at the bottom of their laboratory hive, suggesting that A. borealis can multiply within a hive and potentially infect a pregnant queen bee.

It's currently unclear how the flies are changing the bees' behavior, though the researchers hypothesize that the flies somehow affect the bees' circadian rhythm, or natural day/night cycle. The researchers also don't know whether infected bees are leaving the hive to protect other bees, or whether hive mates sense the infection and force the dying bees out.

"A lot of touching and tasting goes on in a hive," lead researcher John Hafernik said in a statement. "And it's certainly possible that their co-workers are finding them and can tell that there's something wrong with them."

Perhaps most important, scientists don't yet understand the role, if any, that the parasitic flies play in the transmission of the CCD pathogens. Are the flies further harming the bees by spreading deformed wing virus and N. ceranae, or do they actually prevent the pathogens from multiplying by quickly killing their hosts?

Whatever the case, the researchers believe A. borealis is likely a new threat for the honeybees. "Honeybees are among the best-studied insects in the world," Hafernik said. "So at one level, we would expect that if this has been a long-term parasite of honeybees, we would have noticed."