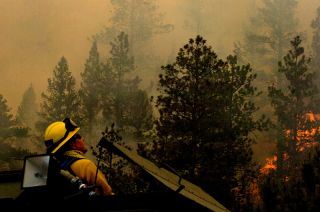 The devastating wildfires in Colorado have provided a showcase for the latest technology in mapping and tracking emergencies. Esri and Google Maps are presenting maps of the fires that the two companies continuously update, demonstrating an increasingly popular method for disseminating emergency information.

"The primary use is for residents wanting very current information on where the fire is and whether they're going to need to evacuate or not," said Michael Goodchild, a geographer at the University of California, Santa Barbara, who has studied how residents of his own state use updating online maps during wildfires. People may use them to find the nearest shelter and to plan a driving route to their evacuation points, Goodchild said.

Some of the worst fires in local history have forced thousands of people out of their homes in Colorado and neighboring states this week. More than 32,000 people in the Colorado Springs area had to evacuate this morning (June 27).

In California, people often rely on maps like Esri's and Google's even more than they rely upon official government websites. Local government servers often cannot handle the sudden surge in traffic during emergencies, making their sites slow or even nonfunctional, Goodchild told InnovationNewsDaily. Commercial servers are more robust.

Unofficial maps also may update more frequently than official ones because their fact-checking standards aren't as stringent, Goodchild said. Unofficial maps can post information as soon as it is received, whereas government maps may need to wait for a verifying source. The Esri and Google maps of the Colorado fires combine governmental and nongovernmental sources, suggesting they are balancing verified facts and fresh information.

Google's map shows the locations of fires, how well contained different fires are, the locations of shelters for evacuees, and photos taken within the last hour. Google draws its data from governmental groups including the state of Colorado, the U.S. Geological Service, NASA satellite imagery and the National Oceanic and Atmospheric Administration. For photos Google also uses Webcams.travel, a privately made programming interface.

Esri's map shows locations of fires, burned areas, wind direction, precipitation and areas in danger, as well as tweets and YouTube videos that people have made about different locations. Besides Twitter and YouTube, the map draws its data from the same governmental sources Google uses.

While it's easy to imagine how useful it is to have many governmental data sources in one place, are social media services such as Twitter really that helpful?

"It is helpful and it isn't," Goodchild said. "Videos tend to be helpful because you can actually see the fire, and the location where the video was taken tends to be fairly reliable."

On the other hand, Twitter is usually less reliable because people tend to tweet about fires that are far from them, Goodchild said. Thus the location tag in a tweet doesn't tell viewers much about where fires are actually burning – but those are the tags that mapping programs use to decide where to place tweets on a map. "And then tweets are a little bit easier to falsify if you're being malicious," Goodchild added. "Someone can tweet a false piece of information."

Videos can be made up, but not as easily.

Maps like Esri's and Google's have emerged in recent years as more information is posted on the Web and search engines have gotten better at finding it, Goodchild said.

So-called crisis maps show it's possible to automatically scrape the Web for relevant information, then summarize the results in a way that's easy to use and understand. Many institutions, including the FBI, are interested in harvesting and summarizing online data.