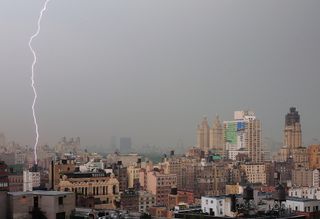 Ben Leshchinsky just so happened to be home from his job as a postdoctoral researcher when he decided to try and snap a photo of the lightning from the brief but intense thunderstorm that hit Manhattan this afternoon (June 22).

He lucked out. Camped out on his terrace at his apartment near 67th Street and Amsterdam Avenue, looking northeast toward Central Park, he caught this image of a lightning bolt in action.

"I've been trying for a while to get a picture of lightning and I succeeded once in Turkey, but not in New York, so I'm really happy I lucked out," Leshchinsky told OurAmazingPlanet.

Leshchinsky took the photo with his Nikon D-90 and used an intervalometer, a device that allows a camera to take repeated photos over a set interval. He used a long exposure, where the shutter is open for an extended period, to capture the brief stab of light.

It appears the lightning struck near the American Museum of Natural History in the Upper West Side area of Manhattan. Although several people said they heard loud thunderclaps at the museum, there were no confirmed lightning strikes, museum official Michael Walker told OurAmazingPlanet in an email.