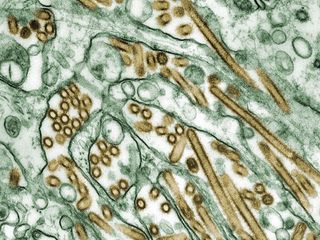 H5N1 bird flu viruses show up in gold; they have infected a cell culture made of canine kidney cells, shown in green. Scientists and public health officials fear H5N1 could one day cause a flu pandemic, just as H1N1 did in 1918.
(Image: © CDC/ Courtesy of Cynthia Goldsmith; Jacqueline Katz; Sherif R. Zaki)

Half a year after controversy arose over research that created more transmissible forms of the bird flu virus, the second and final study to do so has been published. The publication describes how the H5N1 virus, with a handful of genetic changes, can become capable of airborne transmission — a prerequisite for a global flu pandemic.

"It's our hope that tomorrow's publication will help to make the world safer, particularly by stimulating many more scientists and policymakers to focus on preparing defenses," Bruce Alberts, editor-in-chief of the journal Science, where the most recent H5N1 study appears, said during a press conference Wednesday (June 20).

This study, conducted in Ron Fouchier’s lab at the Erasmus Medical Center in the Netherlands, found that as few as five mutations in the H5N1 virus were sufficient to enable it to spread via airborne droplets between ferrets, the mammalian stand-in for humans. Independently, another project accomplished the same thing, but used a different technique to create the mutant virus. [10 Deadly Diseases That Hopped Across Species]

Both projects were intended to understand how H5N1 might acquire the ability to start a pandemic among humans. (H5N1 has devastated poultry around the world, but only rarely infects humans. When it does infect humans, the virus cannot spread effectively among them.)

In December, the U.S. National Science Advisory Board for Biosecurity (NSABB) requested that details of the studies be withheld to prevent them from falling into the wrong hands. This request ignited concerns about scientific censorship.

Some details of the study conducted in Fouchier's lab at Erasmus Medical Center had already been made public when the controversy erupted. However, the publication of the full study this week reveals the mutant H5N1 viruses created by this research were not as deadly as was widely reported. In fact, the researchers report, the infection did not kill any of the ferrets that contracted the disease through airborne droplets.

It was only when the researchers introduced massive doses of the virus directly into the animals' bodies, in particular by putting massive doses into their tracheae, that the infection killed. However, "inoculations at such high doses do not represent the natural route of infection," write the researchers.

According to the World Health Organization, nearly 60 percent of human H5N1 cases have been fatal. However, some researchers have said this statistic is misleading, because only people sick enough to see a doctor and receive a lab test are included in the overall tally of about 600 cases.

To figure out how H5N1 might start a pandemic by acquiring the ability to pass between people via airborne droplets, Fouchier and his colleagues first looked to the past, specifically the flu pandemics of 1918, 1957 and 1968.

The researchers introduced three key mutations associated with pandemics into H5N1. This, however, was not enough to enable the virus to spread via airborne droplets. So, the researchers let nature take over, infecting ferrets with viruses taken from other infected ferrets. After 10 cycles, or serial passages, they found that the infection could spread via airflow from an infected ferret to a healthy one housed in cage nearby.

The ferrets that contracted the altered H5N1 viruses this way showed symptoms, including lethargy and lost appetites, but none died during the experiment, the researchers write.

They also found the new H5N1 viruses did not transmit as efficiently as the pandemic H1N1 "swine flu" virus that was responsible for a global pandemic in 2009. [Top 10 Ways to Destroy Earth]

To figure out what made the altered H5N1 virus capable of air travel, the researchers sequenced the genetic code of all of the viruses capable of spreading this way and found the three original mutations plus two additional changes shared by all of them.

"We show that as little asfive mutations, but certainly less than 10, are sufficient to make H5N1 virus airborne," Fouchier said during the press conference.

More than one way to make airborne H5N1

The other H5N1 study, conducted by Yoshihiro Kawaoka, a professor of virology at the University of Wisconsin-Madison, was published in the journal Nature in May.

Kawaoka's team took a different approach to the same end. They made an airborne version of the virus by introducing four mutations into its hemagglutinin protein (represented by the H in H5N1) and using that to create a hybrid with the pandemic "swine flu" virus, H1N1. Ferrets infected by airborne droplets carrying the virus did not die in this experiment, either.

Preliminary word of these research projects stoked fear that details on how to create these altered H5N1 viruses could fall into the hands of terrorists or inept laboratories, resulting in the release of a deadly virus that could spread around the globe.

At a conference in February, scientists and public health officials decided the studies should be published in full after a delay and a moratorium on this and related research to allow time to educate the public and alleviate anxieties. At the end of March, NSABB reviewed revised versions of both papers, and a majority of members recommended that Kawaoka's study be published as it was, but recommended further revision for Fouchier's manuscript.

Ultimately, the details on the methods or results of this study were not changed, Fouchier said. Instead, in agreement with NSABB advice, Fouchier and colleagues added text to better explain the goals, benefits to public health, biosafety oversight and other details, he said in a statement.