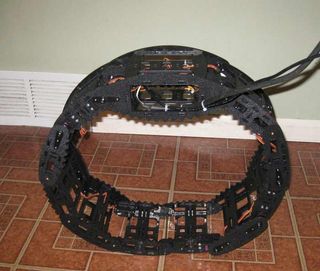 A snake robot can either crawl while lying flat or transform into a rolling wheel.
(Image: © Toby Baumgartner)

A legendary hoop snake capable of gripping its own tail and rolling like a wheel has never proven more than a myth, but a new robot could mimic the supposed creature's ability to both crawl and roll around.

The self-rolling robot is the brainchild of Toby Baumgartner, a robotics engineer based in Columbus, Ohio. His segmented "Troller 1D" robot can either slink along like a caterpillar or snake while lying flat, or roll into a large circle and move forward like the treads on a tank.

The current version remains a tethered machine under direct human control, but a finalized robot design could have motion-sensing capabilities based on sensors found in gaming controllers (such as the Wii remote). That would allow the robot to learn how to roll at different speeds, change directions and transform on its own into crawling mode.

More advanced robots could evolve from Troller 1D's design to someday have the ability to walk like a four-legged robot — a capability based on the separate links that join together to make each robot. A "master link" would have the main controller, motion-sensing ability, wireless communication, a battery pack and servo motors.

Baumgartner's project on the crowd-funding website Kickstarter has already raised much more funding than its $2,600 goal intended to turn the robot into a reality. Anyone who pledges $1,400 can get a kit for the fully functional robot around March 2013.

Transforming robots capable of moving around in different ways have also appeared as research lab projects, even if none are able to morph into a luxury car or fighter jet just yet. National Taiwan University has worked on a robot capable of changing its wheels into legs, and Aerovel's Flexrotor drone can go from hovering helicopter mode to cruising like an airplane.