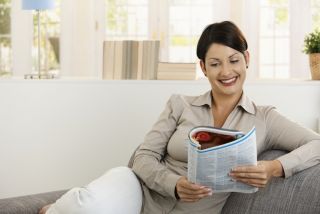 Don't blush, but chances are the magazines you read are getting sexier.

Sexy advertisements are up in magazines from Playboy to Time and Newsweek to Esquire, according to new research from the University of Georgia. Since 1983, the percent of ads using sex to sell products rose from 15 percent to 27 percent by 2003.

Though sexual imagery is used to sell almost everything, even banking services, the bulk of the increase has come in ads for impulse buys: alcohol, entertainment, beauty supplies. These products have long clung to the "sex sells" maxim, said study researcher Tom Reichert, a professor of advertising and public relations at the University of Georgia.

"Advertisers use sex because it can be very effective," Reichert said in a statement. (Past research has suggested, however, that sex doesn't sell to female readers, with sensual advertising images leaving women bored and uninterested.)

Reichert and his colleagues analyzed 3,232 ads published between 1983 and 2003 in six magazines: Cosmopolitan, Redbook, Esquire, Playboy, Newsweek and Time. These magazines were chosen because they have large circulations, include titles that appeal to both men and women, and because they have been included in past studies, allowing for easy comparison across time.

About half of the advertisements included models. Researchers analyzed these ads based on how sexily the models were dressed and whether they were engaging in physical contact, such as kissing or simulated sex, with another model. [Sex Quix: Myths, Taboos & Bizarre Facts]

The ads for health and hygiene products were the sexiest of all ads, with 38 percent containing sexual imagery across the three-decade study period. Beauty came in second, at 36 percent. Drugs and medications, which include weight-loss supplements, came in third with 29 percent of ads containing sexy models.

Just more than a quarter, or 27 percent, of clothing ads showed sex appeal during the study period, compared with 23 percent of travel ads and 21 percent of entertainment ads.

The overall uptick in sexiness was driven by increasingly sex-obsessed ads for alcohol, entertainment and beauty products. In 1983, only 9 percent of alcohol ads used sex to sell booze. Today, that number stands at 37 percent. Sexually arousing entertainment ads increased from 10 percent in 1983 to 33 percent today, and 51 percent of beauty ads now include sexiness, compared with 23 percent in 1983.

Women are overwhelmingly the vehicles by which advertisers portray sexuality, the researchers found. That trend has held for three decades. In 1983, 11 percent of all advertisements contained sexy women, and only 3 percent contained sexy men. As of 2003, 22 percent of ads included sexy ladies, while only 6 percent featured smoldering hunks.

Sexy images popped up in odd places, including in 5 percent of advertisements for financial products in 2003. But for the most part, advertisers use sex to sell products that people might buy on a whim, such as a new flavor of vodka or a papaya-scented lotion. Only two categories — charities and computer companies — never used sex in their ads in this sample.

"Sex is not as effective when selling high-risk, informational products such as banking services, appliances and utility trucks," Reichert said.