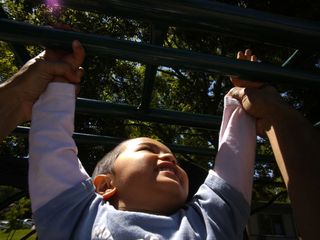 Google has publicly unveiled new photos and the first video from the real view of their augmented reality glasses prototype. The images show what the wearer sees while reading a newspaper, catching a football in the backyard and helping a smiling child play on the jungle gym.

Such views don't necessarily represent anything people haven't seen before with head-mounted portable cameras. But they do hint at how Google Glasses could enable many people beyond geeky life-casters to capture a diverse array of moments in their lives — the video shows the bouncy viewpoint of the Google Glasses wearer doing flips on a trampoline.

Google tech lead Max Braun showed off the photos and video at the Google + Photographer's Conference on May 23.

The Internet search giant has yet to show off real images or photos of how the glasses could seamlessly integrate virtual information with what a person sees in the real world. Its earlier unveiling of "Project Glass" included a concept video that imagined a wearer getting social calendar reminders and map directions in his field of view.

Still, many members of the public still seem enthusiastic about just having a pair of glasses with a small camera attached. One of the top comments on the YouTube video of the trampoline jumping simply stated "Shut up and take my money!"