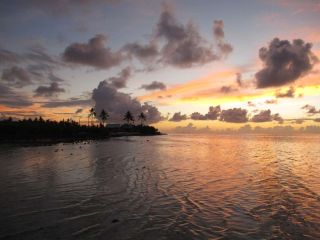 The sun sets on the beautiful atoll of Tarawa, which is being threatened by sea-level rise.
(Image: © Simon Donner)

The Republic of Kiribati in the central tropical Pacific is home to about 103,500 people. Its capital on the atoll of Tarawa has seen dramatic flooding in recent years. For instance, during the 2004 to 2005 El Niño, two major floods occurred — a "king" tide in February 2005 damaged the hospital in the town of Betio, and a second flood two weeks later breached sea walls, flooded causeways and damaged homes and public infrastructure.

The existence of low-lying nations such as Kiribati is indeed threatened by rising sea levels — "there is no doubt whatsoever," said researcher Simon Donner, a climate scientist at the University of British Columbia in Vancouver who has done research on Kiribati since 2005. In fact, the island nation is considering the purchase of land in Fiji to safeguard its people threatened by the rising seas.

Moreover, the flooding events Kiribati has seen are more likely to happen as global average sea levels continue to rise. "A lot of the country could be uninhabitable within the century," said Donner, who based his conclusions on a review of past research on the phenomenon. [Top 10 Ways to Destroy Earth]

"The evidence for a human-caused increase in global sea level is overwhelming," Donner added. "I'm merely reminding people that, like the temperature, the sea level varies from place to place and from day to day."

Sea level can vary over time for many reasons. There are daily, weekly and annual cycles of tides due to the gravitational pulls of the moon and sun. Also, sea level at any single location is sensitive to changes in the weather and ocean features, with sea level capable of rising on an hourly to weekly time scale during periods of low atmospheric pressure — for example, the storm surges driven by tropical cyclones. In addition, local sea level can vary on weekly to monthly time scales because of phenomena such as El Niño and La Niña, collectively known as the El Niño Southern Oscillation. This oscillation refers to the seesaw pattern of reversing surface air pressure between the eastern and western tropical Pacific.

At the same time, people are modifying coastlines in ways that can influence the magnitude and frequency of floods, as well as the very shapes of islands. For instance, land reclamation at Tarawa — which involved filling in areas behind sea walls — increased land in some locations but aggravated erosion and flooding in others, such as the atoll's airport. Mining barrier reefs and beaches for construction material can also make the shoreline vulnerable to extreme tides and storms.

Moreover, the building of causeways between islets has altered how these small islands evolve, diverting sediment to some while eroding it away from others. For instance, the loss of the lagoon islet of Bikeman, a once-popular resting spot for fisherman near Betio, is due primarily to the construction of the Betio-Bairiki causeway, and not rising sea levels.

Donner wants to avoid the false impression that Tarawa is subject to constant flooding because of sea-level rise.

"Climate scientists often try to work out the odds of an event, like a heat wave, happening with and without the human influence on the climate," Donner said. "We should analyze recent storm surges and flooding events the same way."

Donner detailed these findings April 24 in the journal Eos.