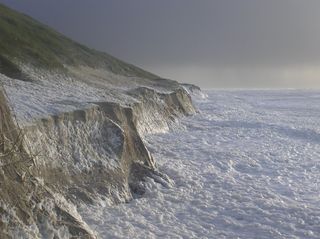 Using the natural luminosity of sand grains, researchers have discovered that a record-breaking flood hit the Dutch coast in either 1775 or 1776.

The finding reveals a new way to look back in time at extreme weather events. Measurements of floods, storm surges and other phenomena didn't begin in earnest until the late 1800s. That makes it hard for scientists to track whether weather is becoming more severe, and it also makes it difficult to predict worst-case scenarios for an area.

To go back further in time, researchers at the Delft University of Technology in the Netherlands examined a layer of beach dune sand exposed by a storm in 2007. They sampled buried sand grains from the layer and conducted an analysis called optical stimulated luminescence to find out how long ago the sand had been laid down.

Optical stimulated luminescence takes advantage of the fact that low levels of background radiation are everywhere. Sediment absorbs this radiation, but when sand is exposed to the sun, that radiation "leaks" out, resetting the radiation level to zero. Using a special light wavelength, researchers can stimulate similar radiation "leaks" in the lab, measuring how much radiation comes out of the sand grains over time. The result is a measurement of how long it's been since the sediment last saw sunlight.

By measuring the sand's luminescence and comparing it to written records of large storms, the researchers were able to pin the sand deposit down to a storm in 1775 or 1776, an era of increased storminess in that part of Europe. [Hurricanes from Above: See Nature's Biggest Storms]

The 1700s storm was a record-breaker: It dwarfed the largest flood on record in the Netherlands, the researchers report in the November issue of the journal Geology. That flood took place in the winter of 1953, caused by an 18.4-foot (5.6-meter) storm surge in the North Sea. Nearly 2,000 people died in the Netherlands, and several hundred more drowned in England and Belgium, because of that storm.

The find is no guarantee that another giant storm surge is due, but it does reveal the potential for disaster in low-lying coastal areas of Europe. The researchers hope to use the sand technique to understand storm surge risks across coastal regions.