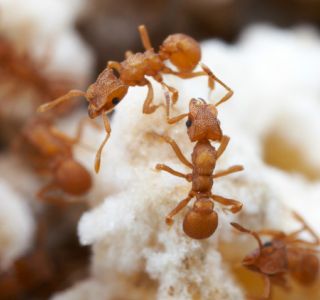 Cyphomyrmex wheeleri ants in Texas tend their fungus garden. The garden consists of a particular fungal species that the ants and their ancestors have continuously cultivated for over 5 million years.
(Image: © ©Alex Wild)

A group of fungi-farming ants are not only loyal to particular species of fungus, the relationship is so close it appears the ants and the fungus may be evolving together, a new study indicates.

Each species of farming ants exclusively grows a particular species of fungus to feed their colony, even when the ants' nests are spread as far apart as Costa Rica, Panama or Ecuador, said the researchers, who calculated that the oldest of these relationships traces back more than 5 million years.

The close relationships between these ants and fungus have important implications for their evolution; the results of the new study suggest that when ants switch crops, they diverge into a new species.

"That is probably the most intriguing part of all this, it was driving speciation," said Ted Schultz, a research entomologist with the Smithsonian Institution and an adjunct professor at the University of Maryland. Speciation refers to the formation of new species.[Image Gallery: Ants of The World]

About 240 species of fungus-farming ants have been described, with the most high-profile one being leaf-cutter ants that collect leaves to feed a fungal crop that cannot survive without the farmers (likewise, the ants can't survive without the fungal food). Leaf-cutter ants belong to a group that evolved from ants that practice what entomologists refer to as a lower agriculture, growing fungi that can also survive alone, without attention from the farmer ants.

Researchers' interest was piqued when they found two members of this group of species,C. longiscapus and C. muelleri, each cultivate a different fungus. These two ant species, however, can live in nests within inches of each other — indicating they have the opportunity to interbreed but were not doing it.

"We wondered, 'Could what fungus you grow have anything to do with speciation?'"Schultz said, referring to the emergence of new species.

Ants rely on odor to identify potential mates from their own species, so it is possible male and female fungus-growing ants choose mates in part by recognizing the odor of the fungus with which the potential mate grew up, Schultz said.

To test the hunch that the evolution of ant species was tied to the species of fungus they cultivated, the research team, led by Natasha J. Mehdiabadi, of the Smithsonian Institution and the University of Maryland, analyzed DNA (deoxyribonucleic acid, the code that makes up genes) from 138 individual ants and 405 fungal samples taken from 88 nests in Ecuador, Panama, Costa Rica, California and Texas. They also incorporated genetic data from other, related ant and fungal species into family trees they reconstructed for both the ants and the fungi. [Infographic: The Life of an Ant]

"Contrary to expectation, we found that each ant species has been exclusively associated with a single fungal cultivar 'species' for millions of years — even though alternative cultivars are readily available," the team writes in research detailed today (May 15) in the journal Nature Communications.

While each species of ants appeared loyal to a particular fungus, the fungi themselves were not as loyal, sometimes serving as a crop for more than one species of ant.

Even so, the relationships appear to have affected the evolution of the fungi as well, since they, too, appear to have diverged from their ancestors starting when they were first farmed by the ant ancestors of the C. wheeleri species, Schultz told LiveScience, adding that none of these current fungal groups is known to have free-living forms.