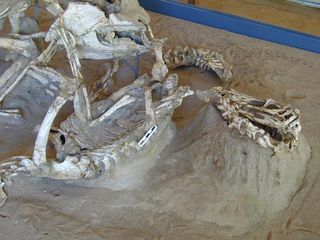 Velociraptors, tyrannosaurs and other related carnivorous dinosaurs breathed like some of today’s diving birds and consequently were probably speedy predators, a new study finds.

In recent years, paleontologists have learned that birds are direct descendants of theropod dinosaurs, sharing anatomical features such as hollow bones, three functional toes on their feet and often even feathers.

"Our findings support this view and show that the similarities also extend to breathing structures and that these dinosaurs possessed everything they needed to breathe using an avian-like, air-sac respiratory system," said study leader Jonathan Codd of the University of Manchester in Great Britain.

Birds, and in particular diving birds, such as pelicans, ospreys and cormorants, have one of the most efficient respiratory systems of all vertebrates because they need to supply their bodies with enough oxygen to sustain them during flight.

Study co-author Phil Manning studied the fossilized remains of maniraptoran dinosaurs and extinct birds, such as Archaeopteryx, and found that certain modern birds' breathing structures, known as uncinate processes, were also present in the dinosaurs.

"The uncinate processes are small bones that act as levers to move the ribs and sternum during breathing," Codd said. "Interestingly, these structures are different lengths in different birds—they are shortest in running birds, intermediate in flying birds and longest in diving birds."

"The dinosaurs we studied from the fossil record had long uncinate processes similar in structure to those of diving birds," Codd added. "This suggests both dinosaurs and diving birds need longer lever arms to help them breathe."

These findings, detailed in the Nov. 7 issue of the journal Royal Society B: Biological Sciences, also support the theory that these dinosaurs were quick off the mark when pursuing their prey, Codd said.

"Finding these structures in modern birds and their extinct dinosaur ancestors suggests that these running dinosaurs had an efficient respiratory system and supports the theory that they were highly active animals that could run relatively quickly when pursuing their prey," he said.

The research was funded by the German Research Council and the University of Manchester.