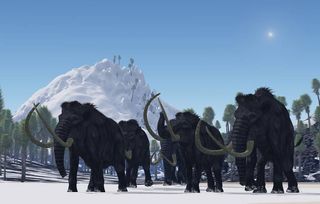 These dwarf mammoths were not woolly mammoths. Rather, the researchers suspect the beasts were more adapted to warmer environments, appearing more like modern African or Asian elephants, with a sparse covering of hair. They would've sported curvy tusks, though, as all mammoths do.
(Image: © Catmando | Shutterstock)

The smallest dwarf mammoth, standing at under 4 feet (about 1 meter) at the shoulders, has been uncovered on the Greek island of Crete, researchers say.

These findings could help yield insights as to how giant animals can shrink to tiny sizes over evolutionary time, scientists added.

Dwarfism often happens to species of large animals when they get trapped on islands, including dinosaurs. Scientists think dwarfism helps giants survive within the limits imposed by islands.

Ancient Mediterranean dwarf elephants are especially extreme examples of island dwarfism. Over the course of less than 800,000 years — a short stint on an evolutionary scale — these dwarfs are thought to have descended from larger European elephants, weighing 100 times as much, which lived on mainland Europe.

"There's a big question regarding these elephants — how can something so big become dwarfs so small?" said researcher Victoria Herridge, a vertebrate paleontologist at the Natural History Museum in London.

To learn more, Herridge and her colleagues analyzed dwarf fossils first discovered in Crete (an island some say was the birthplace of the Greek god Zeus) more than a century ago. Paleontologists have long argued whether the remains belonged to curvy-tusked mammoths or straighter-tusked elephants.

Teeth discovered more recently in the same area in Crete now suggest the animal was in fact a mammoth, Mammuthus creticus. A newfound foreleg bone suggests it was the smallest mammoth known, standing only about 3 feet 8 inches (1.13 m) high at the shoulders and weighing only approximately 680 pounds (310 kilograms), making it about the size of a modern baby African or Asian elephant. [Photos of the Dwarf Mammoth Fossils]

These dwarf mammoths were not woolly mammoths, scientists noted.

"When most people think of mammoths, they think of woolly mammoths," Herridge said. "We think this dwarf was more adapted to warmer environments, more in appearance like modern African or Asian elephants, with a sparse covering of hair, although they would have had curvy tusks like all mammoths."

Mammuthus creticusis the first evidence for extreme island dwarfism in mammoths. It would have been comparable in size to the smallest dwarf elephant known, the extinct species Palaeoloxodon falconeri from Sicily and Malta, which stood only about 3 feet 5 inches (1.04 m) high at the shoulder and weighed only approximately 525 lbs. (238 kg).

The fossils suggest this dwarf mammoth was descended from one of the first mammoth species to arrive in Europe from Africa, Mammuthus rumanus or Mammuthus meridionalis. As such, the researchers suggest dwarf mammoths may have evolved much earlier than previously thought — as far back as 3.5 million years ago.

"Now that we know what this dwarf species might have been descended from, we can ask bigger questions, such as how and why and how fast dwarfism happened here," Herridge said.

"This is an interesting period for Crete — back then, it might have been made of small islands, smaller than today," Herridge said. "That's an interesting consideration for the extreme dwarfism we see here."

Given the scant fossils and the uncertainty about Crete's environment during this period, not much is known about how this dwarf might have lived. Still, its teeth do suggest it browsed on shrubs as opposed to grass like woolly mammoths.

Returning to where these fossils were found to excavate more specimens is likely to be tricky. The site is in a remote, fissure-laden part of Crete — the shoreline is very jagged there, making it hard to approach by boat, so the area is best reached by two hours of walking past monasteries and a military base. "The site's quite well-protected as it is, and we don't want to start there until we've properly thought out an approach," Herridge said.

The scientists detailed their findings online May 9 in the Proceedings of the Royal Society B.