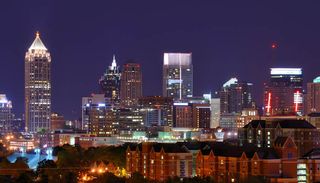 Rather than the big cities like New York and LA setting music trends, researchers found Atlanta (skyline shown here), Toronto and some other smaller cities were best at picking music hits ahead of the pack.
(Image: © SeanPavonePhoto | Shutterstock)

What do music tastes and a flock of pigeons have in common? More than you might think, say researchers who are modeling the spread of music trends across the globe.

The new research, pre-published on arXiv.org, shows that some cities are consistently ahead of the flock and pick music hits before they become popular.

"I would expect big cities like New York and Los Angeles to be ahead, basically, but the data say that's not the case," said Conrad Lee, a computer scientist at University College Dublin, who led the study. "It's really Atlanta, Montreal, Toronto and the Scandinavian cities that come out ahead."

To separate the trendsetters from the laggards, Lee adapted a method that had been used to identify the lead birds in flocks of pigeons.

"Even though it was used for kind of a specific, obscure topic, you can use the method for measuring leadership in many different systems — so long as you can plot things as points in space," Lee told LiveScience.

To plot those points, Lee gathered stats from the music-sharing site last.fm, which tracks who's listening to what songs and where. Then he translated about 200 cities' music preferences into coordinates within what he calls "artist space."

Now, imagine thousands of artists and dozens of cities all plotted on the same graph in a many-dimensional artist space. Cities that listen to the same artists in similar amounts are close together in this space, and cities with different tastes are farther apart.

By analyzing how cities moved around in artist space over time, Lee could tease out the trendsetting  cities that consistently latch onto music before it becomes popular  from the laggards, cities that are late to the party, so to speak.

Who are the "cool kids?"

Atlanta, Stockholm and Oslo were the overall leaders in Lee's calculations, but different music genres often had different lead cities. Paris and Montreal were the trendsetters in indie music, for example. Atlanta, Toronto and Chicago, meanwhile, were major leaders in North American hip-hop trends. New York and Los Angeles, Lee's original bets, usually ranked somewhere in the middle of the leader boards overall.

Why are some cities consistently ahead of the trends? That's hard to say, since the study didn't look at what's behind the popularity of certain artists in certain cities. It could be that Atlanta and Stockholm genuinely do influence other cities' music picks, but something more random, like tour dates or marketing strategies, may also be at play, Lee said.

Another interesting find was that neighboring cities often, but not always, share the same music tastes. For instance, pairs of cities, including Cincinnati and Columbus, Ohio; Portland, Ore., and Seattle, Wash.; and Berlin and Dresden, Germany, shared similar music preferences.

"That makes intuitive sense given their geographic locations," Lee said.

But the trends in New York, Chicago, San Francisco, Austin, Seattle and Portland also cluster together, even though the cities span the North American continent.

"I'd say these are the 'cool kids' — trendy cities with similar tastes," Lee wrote in an online analysis. Similarly, he points out, Montreal, Toronto and Vancouver have tastes different from the rest of Canada.

Lee's findings are currently under further peer review and have yet to be published in a scientific journal. Next on his to-do list? He hopes to use this method to predict what artists or songs will become popular. Until then, Lee and everyone else can only guess as to why some cities are good at picking chart-toppers.

"We're all tempted to try and make sense of the data," Lee said, "but it's all just speculation, really."