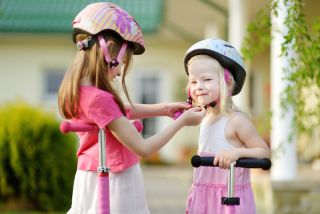 Wearing a bicycle helmet may seem like a no-brainer, but preteens and teens tend not to wear them, even though helmets dramatically decrease the odds of a traumatic brain injury, a new study finds.

Bike riders who wear helmets are 58 percent less likely to get a severe traumatic brain injury (TBI) after an accident compared with riders who aren't wearing helmets, according to the findings presented today (Oct. 8) at the 2015 Clinical Congress of the American College of Surgeons in Chicago. The research has not been published in a peer-reviewed journal.

Researchers at the University of Arizona Medical Center looked at the records in a national injury database of 6,267 people who had an intracranial hemorrhage (a brain bleed)following bicycle-related accidents in 2012. Of these people, only about 25 percent were wearing helmets, they found. [9 Weird Ways Kids Can Get Hurt]

The researchers found that 176 people died as the result of their accident. Riders who were wearing helmets were 59 percent less likely to die in their accidents, compared with helmet wearers. People who wore helmets also had a 61 percent lower risk of needing a craniotomy (an operation that removes part of the skull to expose the brain), and a 26 percent lower risk of having facial fractures compared with people who didn't use helmets.

Still, "if you are severely injured and you were wearing a helmet, you are going to fare better than if you were not," said Dr. Bellal Joseph, lead author of the study and an associate professor of surgery at the center. "When you hone in on that severe group of people who actually developed a brain injury, and then look at how they did, the helmet really made a difference."

The researchers also looked at the age and gender of each patient who developed a TBI following a bike-related accident.

"We tried to see how the pattern of helmet use varied over different age groups," Haider said. "The lowest incidence of helmet use was seen in the age group of 10 to 20 years of age. But as we went up every 10 years, the likelihood of helmet use went up."

That trend continued with each decade of life until age 70, when helmet use curiously decreased. In addition, they found that females are more likely to wear helmets than males are.

The findings may help with the creation of laws and programs that promote and enforce helmet use, the researchers said.

Only 21 states and the District of Columbia have helmet laws, and they generally apply to bicyclists younger than age 16, according to the Governors Highway Safety Association, a nonprofit representing the country's highway safety issues.

Helmet laws do make a difference. State helmet laws increased average helmet use by almost 20 percent, according to a 2002 nationwide study in the journal BMJ.

"We need to take this data and take it to the next level and move forward with policy and injury prevention, especially for the younger age groups," Joseph said.