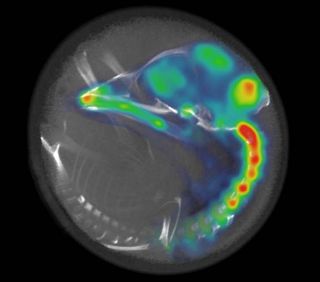 This image of the chicken embryo skeleton inside an egg shows the developmental stage, and the colors indicate nervous system activity in the brain.
(Image: © Balaban et al. Current Biology)

Long before they are ready to hatch, baby birds are awake and their brains churning, a new study suggests.

As for what wakes them up, the researchers found loud, meaningful sounds, like the squawks of other chickens, will rouse the sleeping embryos once they are more than 80 percent gestated.

"This work showed that embryo brains can function in a waking-like manner earlier than previously thought — well before birth," study researcher Evan Balaban of McGill University said in a statement. "Like adult brains, embryo brains also have neural circuitry that monitors the environment to selectively wake the brain up during important events."

"Unfortunately, no one yet understands exactly what sleep-brain activity patterns are controlling, and why they exist," Balaban told LiveScience. "Once embryo brains reach this state, we found that they could be awakened; we think the waking-like" pattern of activity is an immature version of what is seen in awake animals after birth."

To figure this out, the researchers used a new brain scanning technique that can detect very small changes in the levels of labeled sugar molecules in the brain. Brain areas taking up more sugar are more active. They watched the brains of chicken embryos for the last 30 percent of the time they were growing in their eggs. [11 Facts About the Baby Brain]

Before the chickens are 80 percent developed, the animals are not asleep or awake, their brains seem to be in a state similar to that of people who are in a coma or under anesthesia, Balaban said. During that time they are moving spontaneously, but show no brain activity.

Once the chicks reached that 80 percent mark in development, higher-brain regions, responsible for more complicated though processes including learning, switched on and began crackling with activity. At the same time, their spontaneous physical movements ceased and they began "sleeping." This waking brain activity means the chicks can even start learning, and can be "woken up" by chicken sounds.

"The last 30 percent of fetal brain development is a more interesting time than we previously thought, because it's when complex whole-brain functions that depend on coordination of widely separated brain areas first emerge," Balaban said. "Embryos begin to cycle through a variety of brain states."

The findings have implications for human baby development. One big question is how this brain activity, if it indeed occurs before birth in humans, might change when a baby is born prematurely. If a baby is born early and its brain is switched on before the wiring is in place, it may have some long-term developmental consequences, Balaban said. [That's Incredible! 9 Amazing Baby Abilities]

"We are excited by the possibility that the techniques developed here can now be used to provide answers to these questions," Balaban said, since humans and chickens have similar brain activity patterns and follow a similar developmental plan.

"It is very likely that human fetuses also develop similar, integrated brain functions, including sleeplike states and the ability for "waking-like" brain activity before birth, although we can't say exactly when this would start," Balaban said.

The study is published in today's (May 3) issue of the journal Current Biology.