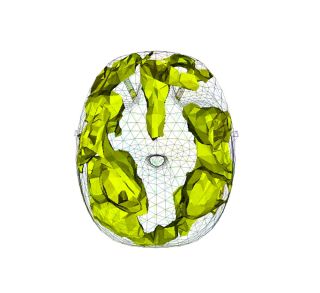 Reconstruction of the brain during the onset of anaesthesia. This particular frame shows the brain in an anaesthetised state following global conductivity changes.
(Image: © University of Manchester)

New 3-D images reveal for the first time what happens inside the brain when a person loses consciousness, suggesting the mysterious sleeplike state occurs as electrical activity deep in the brain dims and connections between certain neurons suddenly break down.

"We have produced what I think is the first video in existence in the entire world of [the brain of] a patient being anesthetized," said study researcher Brian Pollard, of the University of Manchester. "We are seeing different parts of the brain, different areas, being activated and deactivated."

Loss of consciousness occurs when the brain is no longer aware of one's surroundings and so the body stops reacting to the world around it. Scientists and doctors aren't sure how this happens, but distinguish it from consciousness, or the ability to understand, be self-aware and think in the unique way that humans do. [Top 10 Mysteries of the Mind]

Previous theories, by Dr. Susan Greenfield of the University of Oxford, suggest that our brains are on a "dimmer switch," a theory supported by the new data. Here's how it works: When we're awake, certain groups of brain cells interact and work together to decipher information sent to the brain. When this "dimming switch" gets turned down — as would happen with an anaesthetic drug — these brain-cell interactions don't work as well together and communication between the groups is inhibited.

A new imaging method allowed the researchers to monitor the electrical activity deep inside the brain in real time through 32 electrodes on the head of each study participant. Because the electrodes monitor this activity 100 times per second, the researchers were literally able to watch as patients went from awake to an unconscious state.

With the technique, the team has studied the brain activity in 20 healthy adults, who will serve as controls; the researchers will compare the brain activity of controls with that of patients undergoing surgery (and being "put under"), so they can get a better handle on how a person loses consciousness. []

They have studied 17 patients losing consciousness so far, and all show similar patterns of activity deep within the brain.

Pollard could even see unconscious patients' visual cortex working when he appeared in their frame of view. "The patient is lying still and quietly and there is some activity in the right hand side of the brain, what we suspect is the visual cortex," Pollard told LiveScience. "We observed in the brain the patient seeing me."

"We aren't entirely certain what it means. We are seeing it for the first time," Pollard said.

The device could be useful for monitoring head injury, stroke or dementia patients, to see how their brain activity changes with their condition, Pollard added.

The research will be presented at the European Anaesthesiology Congress on June 11.